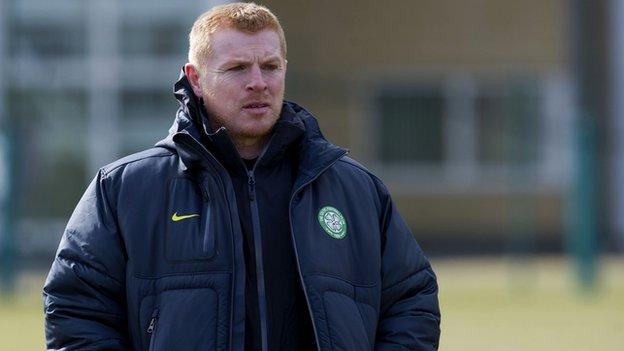 Celtic manager Neil Lennon hopes "a bit of swagger" from his side will help them in their pursuit of a second straight Scottish Premier League title.

Lennon's men will be crowned champions if they beat visitors Hibernian and Motherwell lose to St Mirren.

"First of all, we have to beat Hibs and then see what the Motherwell v St Mirren game brings," said Lennon.

"We are at home and our home form has been sensational for the last seven or eight games."

The former club captain celebrated five SPL titles as a player and hopes to secure his third trophy since becoming manager, his first being the 2011 Scottish Cup.

"I would be delighted, thrilled," he said on the prospect of winning another championship.

"It's a great feeling, it's a great sense of achievement and it's been our priority from the start of the season.

"I want us to play with a bit of swagger that's been missing for the last couple of weeks.

"To put another title on the record of the club would be brilliant and would be great for the players as well and thoroughly deserved."

Hibs have plenty to play for themselves with Pat Fenlon's side still able to clinch the final top-six place before the league splits in two.

However, the visitors need to win and hope other results to go their way to finish in the top half.

"It will be a very hard game," said Celtic defender Charlie Mulgrew. "Like any team that comes to Celtic Park, they are very motivated.

"It's one of the big games of the season for them and we will need to match that.

"Everybody looks to win and raise their game against Celtic."