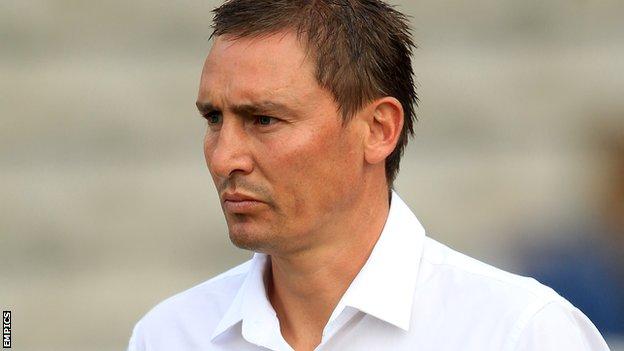 The Shots are currently bottom of the table - but with two games in hand.

Scott told BBC Surrey: "I knew they could do it before. It's having the players believe they can do it.

"The determination and the character showed through last Monday. It gave everyone a massive lift and shows we have character to overcome problems."

The Shots had led 2-0 against Oxford, but were pegged back to 2-2 before Jeff Goulding headed the winner three minutes from time.

"That sometimes gives you the lift you need and proves to people you can do it," Scott said.

"It is important we show that for the next five games."

Aldershot did not play on Saturday because of Southend's involvement in the Johnstone's Paint Trophy final, but did not lose any ground in the relegation dogfight.

Torquay, Wimbledon and Barnet all lost, while York and Accrington drew, leaving the Shots two points from safety and four points behind three other teams.

With games in hand on the five teams above them, Scott has urged his side, who have drawn four of their last seven matches, to build on the win over Oxford.

"It is all about wins at this stage of the season," he said. "There have been far too many draws.

"If we give ourselves more chance of scoring goals, we have got a chance of winning because defensively we're pretty solid. We will continue to work hard on every aspect.

"If teams lose around us it will make our task easier. I've got a points target in my head and if we get to that, it won't matter what other teams do."

Aldershot play one of their games in hand on Tuesday evening when they travel to promotion-chasing Port Vale.

Vale boss Micky Adams said Aldershot were "bottom of the table for a reason" ahead of their postponed match on 23 March and Scott believes that will serve as motivation for his players.

"Certain things happen at certain times in the season. Sometimes managers say things to deflect from what is going on at their own club.

"If other managers want to speak about us, that's fine. We'll use it as motivation and we concentrate in-house. If we get involved in mind-games with other teams then we lose focus on what we are doing here," Scott added.

"My complete determination is on this group of players and getting us ready for Tuesday and the following games after that.

"We will find out if they have got the stomach for the fight and see if they want to get promoted as they have got a few clubs chasing them."