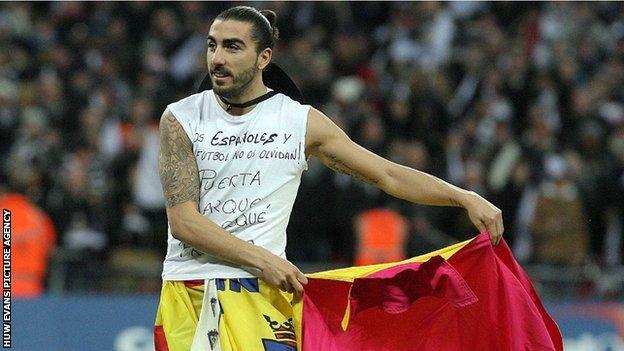 Defender Chico Flores has signed a one-year extension to his contract with Swansea City.

The new deal means the Spaniard is committed to the club until 2016.

Manager Michael Laudrup signed Flores from Genoa in July 2012 for an initial fee of £2m, having previously had the player on loan at Real Mallorca.

"I had no hesitation in signing a new contract for a number of reasons, but mainly because I can only see the team and the club growing," said Flores.

The former Spanish under-21 international is expected to be fit for Saturday's visit to Norwich after making a comeback against Spurs on 30 March following an ankle injury.

Chico, 26, whose full name is Jose Manuel Flores, has been a key member of the Swans team which has impressed in the Premier League this season.

But he missed most of February and March after injuring an ankle in the 4-1 defeat of Queens Park Rangers on 9 February.

The injury meant he missed the 5-0 win over Bradford in the final of the Capital One Cup, but he did memorably take part in the post-match celebrations with his impersonation of a bullfighter in front of the Swansea fans.

"Everything has gone better than I ever expected considering I only arrived in Wales in the summer," added Flores.

"I have found it easier to settle here than when I moved from Spain to Italy.

"In my debut season the club has won its first major trophy and is safe again for another year in the Premier League.

"It's been a fantastic experience and a massive achievement for the club."

Flores is among a number of Swans players who have signed contract extensions. Others include his fellow Spaniard Michu, Wales captain Ashley Williams and long-serving midfielder Leon Britton.