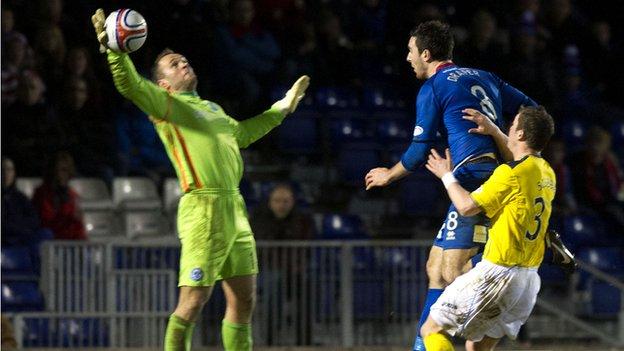 Mannus made crucial saves to keep Saints level, with both sides already assured of a Scottish Premier League top-six place.

"He's been in fantastic form. He's not flashy, he makes saves when he needs to and he's a calming influence. He was excellent tonight."

The result keeps third-place Inverness five points ahead of the Perth outfit, with the teams finishing second and third in the league guaranteed a place in next season's Europa League qualifiers.

And Lomas hopes St Johnstone get three home games in the SPL's post-split fixtures, which will be announced on Monday.

"If we had conceded, we wouldn't have been able to catch Inverness," he said. "It's still going to be a tall order to make up five points.

"That might be a great point come the end of the season.

"At home, we're a match for anybody. Hopefully, we get a wee bit of fortune with the fixtures."

Though the home side created the more obvious chances, Saints had plenty of possession in attacking areas throughout the 90 minutes.

"It was a strange game because I thought we probably dominated proceedings but Inverness had two clear-cut chances just by our lack of concentration," added Lomas.

"It's a good point because teams have come here and got a right good hiding.

"We dominated for large periods of the game. It would've been very cruel on our lads if we hadn't have got at least a point."