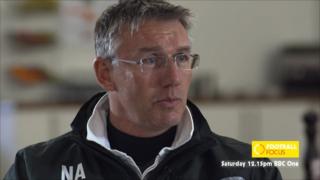 Adkins's dismissal on 18 January came despite his having led the club to successive promotions and with the Saints three points clear of the relegation zone, but he insists his replacement Mauricio Pochettino will be welcomed into his office after the game as any other manager would.

You can see the full interview with Adkins on Football Focus on BBC One and here on the BBC Sport website at 12:15 BST on Saturday.