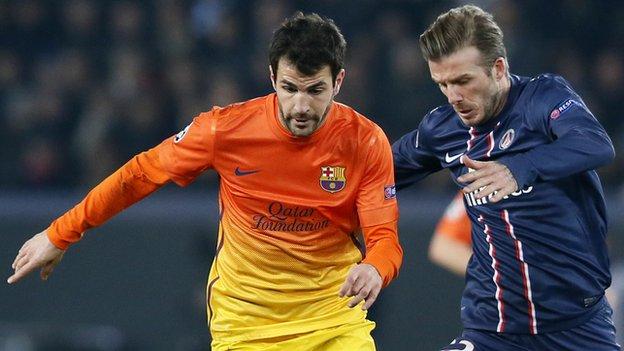 Ancelotti chose to start the 37-year-old former England captain ahead of Italian Marco Verratti in midfield.

Beckham had made only one start and four substitute appearances for the French side before Wednesday's match.

"It is wrong to say that [the club's owners from] Qatar said 'Beckham to play'," explained Ancelotti.

"Everyone must understand that club presidents are very intelligent and cannot force a coach to a player. Because in this case, the coach can say to the president: 'OK, you're doing the coaching and I go home'."

"Never in my career has a president forced me to bring a player, whether [AC Milan president Silvio] Berlusconi, [Chelsea owner Roman] Abramovich or Nasser [Al-Khelaifi, president of PSG].

"It annoys me that anyone would think that. I am not a supporter or friend of Beckham, I try to be objective.

"Beckham deserved to play even if he is 37 years old."

However, Beckham was heavily criticised for his performance in the quarter-final first-leg draw by the French media.

Ancelotti added: "Criticism of him is abnormal and unjust, he had a very good game. He followed exactly the strategy I asked, giving the ball quickly.

"If Paris was good in the first 30 minutes against Barca it's because Beckham was good, because he sought to play fast."