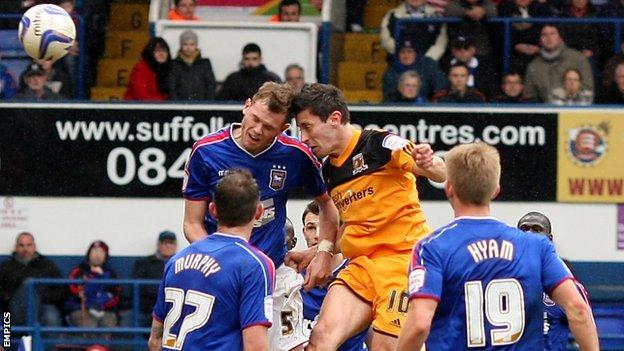 Hull closed in on securing automatic promotion to the Premier League with victory at Ipswich.

The visitors took the lead through a Robbie Brady penalty after Guirane N'Daw's challenge on David Meyler.

Anthony Wordsworth equalised for the home side when he headed in a right-wing Luke Chambers cross.

Watford were beaten by relegation-threatened Peterborough to give the Tigers the upper hand in the race for a top-two spot.

Ipswich had their unbeaten run of five games ended by the defeat and are left five points clear of the relegation zone.

The home side quickly came under pressure from the visitors and eventually buckled after N'Daw's challenge on Meyler allowed Brady to coolly slot in a spot-kick.

Hull piled on the pressure in search of a second and defender Abdoulaye Faye sent a header straight at keeper Scott Loach.

Loach also kept out a Brady shot with a fine save before denying George Boyd.

Ipswich regrouped at half-time and Wordsworth's equaliser raised their confidence as they also went close when Daryl Murphy and Carlos Edwards headed off target.

"From day one I thought it [the fight against relegation] would go down to the wire.

"I still think 56 points will do, but I don't get everything right.

"My attitude has always been to keep calm, carry on and take it one game at a time. That's been my attitude since 1 November."

"We're in a fantastic position but that's all it is and we've got another tough game on Tuesday [at Wolves].

"We've seen before how teams at the bottom have beaten the teams at the top, because the division is so even, but it's a good position to be in.

"We can't get carried away, though. We're within touching distance but we've still got a job to do. We haven't got there yet and we've got to see it through."