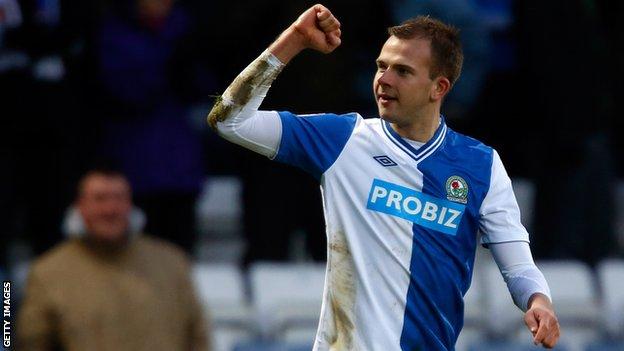 Blackburn climbed out of the Championship relegation zone with a crucial victory over Derby County.

Jordan Rhodes scored his 26th Rovers goal this season from the penalty spot after he was fouled by Jeff Hendrick.

Scott Dann headed in on the stroke of half-time to secure Blackburn's first league win at Ewood Park in over two months, ending a 10-match winless run.

The Rams enjoyed plenty of possession throughout the game but struggled to break down Rovers.

The win was the first of caretaker boss Gary Bowyer's second spell in charge of the club in a turbulent season and will do much to lift the gloom that has engulfed Ewood Park in recent months.

If we're fourth from bottom on May 4, there will be a lot of happy people

Bowyer's midweek trip to visit the club's owners Venky's did not appear to distract the squad and any early nerves were settled when Derby's Hendrick brought down Rhodes inside the penalty area.

The Scotland international picked himself up before sending goalkeeper Frankie Fielding the wrong way. The ninth-minute goal gave the hosts the momentum and Josh Morris fizzed a shot wide before Fielding smothered another Rhodes effort.

However, Blackburn goalkeeper Grzegorz Sandomierski made a superb save at his near post to keep out Chris Martin's header on the half hour mark and Grant Hanley headed David Dunn's corner against the crossbar at the other end.

It was from another corner, this time from David Jones, that saw Blackburn take a two-goal cushion. Fielding came for the cross but the ball slipped through his grasp and Dann was on hand to nod in from close range.

Rhodes had a glorious chance to make it 3-0 in the 62nd minute when he was one-on-one with Fielding but the Derby keeper made a good save.

Conor Sammon had tried a shot from outside the area in the first half for the visitors and did so again after 70 minutes, but the result was the same as he missed the target.

Ward did a little better with 10 minutes remaining, forcing Sandomierski to get down to his left to make a save after bursting into the box.

"The situation that we're in now, if we're fourth from bottom on May 4, there will be a lot of happy people. Not for the reasons we should be happy, but because we've stayed in this division.

"We can't look any further than Tuesday when Huddersfield visit Ewood Park. As much as we want to enjoy this win, we've got to refocus."

On the trip to India: "All along there was no hidden agenda. It was just to get clarification. It can be done on the phone but I needed to see the owners face to face and I came back positive. The players have been positive throughout."

"We certainly paid for our failures in both penalty areas. We spent the last couple of days chatting about keeping Blackburn quiet. To give the penalty away how we did was amateurish.

"It gave Blackburn a big lift and then we create three as good a chances as you'll get away from home. Then we conceded the killer second in disputed added time I have to say.

"He put a minute up and it was two minutes 25 seconds when they added the second which we just wondered what happened. We didn't see a stoppage."