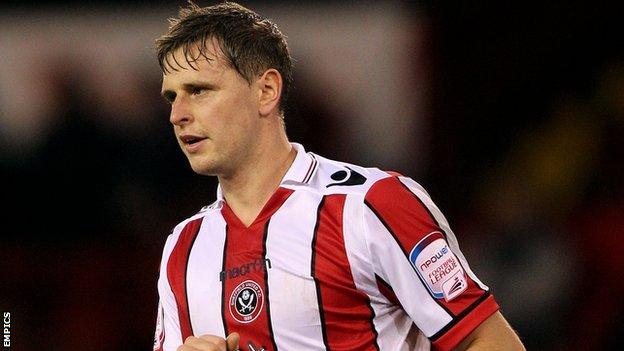 The Blades appeared unaffected by the exit of boss Danny Wilson on Wednesday, and dominated for most of the game.

They took the lead when Chris Porter headed in Tony McMahon's free-kick, and McMahon then executed a superb delivery to Dave Kitson who nodded in with ease.

Swindon did improve after a poor first half, but efforts from Nathan Byrne and Darren Ward both went wide.

The results means fifth-place Sheffield United are now five points ahead of Town, who remain in the final play-off place but are only one point above Walsall and Leyton Orient.

"It was a big day for us. It was a big game and a massive three points for where we want to get to at the end of the season.

"The pressure we put on Swindon was relentless and that comes from a quick start and coming out of the traps at them.

"Ports [Chris Porter] and Kits [Dave Kitson) get goals and the rest of the boys back that up with their performances. I thought we were excellent

"The players have got to look at themselves.

"In the second half we had a little bit of a go and did a little bit better. It's actually quite easy to try and run around when you're 1-0 down."