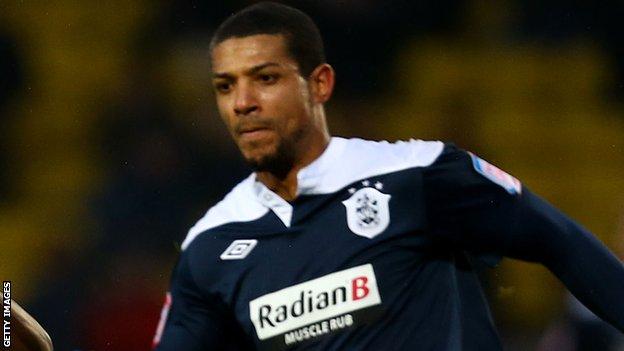 Wolverhampton Wanderers dropped back into the Championship relegation zone as Huddersfield came from behind to secure a vital victory at Molineux.

Stephen Ward put Wolves ahead when he converted Kevin Doyle's cross from 12 yards before Sean Scannell levelled with a fine individual effort.

Huddersfield went ahead just after the hour when Jermaine Beckford tapped in.

Beckford's second then made it 3-1 before Jamie O'Hara added to Wolves's misery when he was sent off.

Defeat for Wolves was their second in succession and means they are second bottom, two points from safety.

Huddersfield, meanwhile, move up to 19th in the table, two points clear of the relegation zone.

The game could hardly have got off to a better start for Wolves, as they took the lead with just four minutes on the clock.

Bjorn Sigurdarson found Doyle on the left, the Wolves captain picked out Ward inside the area and the Republic of Ireland international fired past Huddersfield goalkeeper Alex Smithies.

For the next 23 minutes the home side were dominant but could not turn their possession into chances.

And they were made to pay in the 27th minute when Huddersfield equalised with their first shot on target.

Scannell weaved his way past two defenders before shooting into the bottom corner.

Huddersfield finished the half strongly with Oliver Norwood's shot deflected wide before Neil Danns brought a good save out of Dorus de Vries.

Wolves regrouped at the break and started the second half much as they did the first.

They should have been ahead in the 65th minute when Roger Johnson was presented with an open goal, but somehow shot wide.

Huddersfield took full advantage as Beckford, who had only been on the pitch five minutes, gave his side the lead when he stabbed in after De Vries failed to hold James Vaughan's header.

And the striker netted his second just a minute later, chasing on to a ball following a Wolves error from the kick-off before lobbing De Vries.

O'Hara was then sent off after raising his hands in the direction of Huddersfield's Keith Southern to complete a miserable afternoon for the home side.

"It was a really disappointing result because it was such a big game. But what we have to do now is win on Tuesday against Hull City and hope the results are reversed.

"We have to probably win three games out of the last four which we are capable of doing and we have done it in the past.

"But it is amazing all these teams around us that keep winning."

"It is a good day but we have to keep our feet on the ground because we go again on Tuesday at Ewood Park.

"We worked hard to get in front against Wolves and stayed there which was great. From my perspective it is a great performance.

"It give us two points' breathing space but it also concertinas the division again and brings everyone closer together."