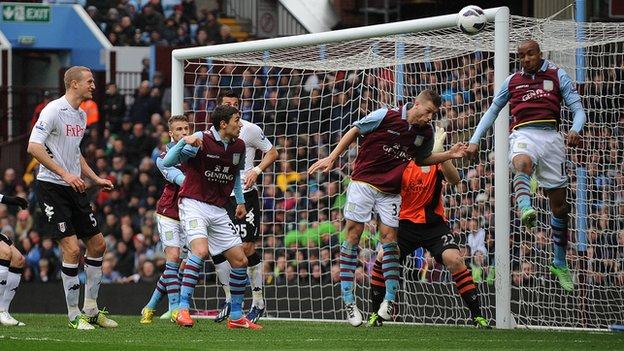 Aston Villa remain precariously placed in the battle against relegation after being held to a draw by Fulham.

Both teams had wasted chances before Charles N'Zogbia deservedly put Villa ahead when he curled in a shot.

But the home side's Fabian Delph glanced Bryan Ruiz's corner into his own net to gift Fulham an equaliser.

Delph had a chance to atone for his error only for the midfielder to sky a far-post shot after the visitors failed to clear an Andreas Weimann cross.

The anxious faces among the Villa crowd as the final whistle closed in were a sign of the trouble their side are in as they lie only three points above the drop zone.

Villa may feel they did enough to beat Fulham but had to settle for a draw ahead of testing games against league leaders Manchester United and fellow strugglers Sunderland.

The Cottagers reached the 40-point mark, which should be enough to secure their safety, after a game in which their keeper Mark Schwarzer stood out.

It had not started well for the home side as they suffered a setback prior to kick-off when striker Gabriel Agbonlahor, who had three goals in his last four games, was ruled out with a thigh injury.

"Will that prove a vital point for Aston Villa or will it be two points lost in the home side's battle against relegation? Charles N'Zogbia gave Villa the lead but victory slipped away."

But there was plenty of intent and industry from Villa early on, with their efforts finally culminating in a first real chance after nearly 25 minutes.

During a spell of Villa pressure, N'Zogbia's first-time shot from a Benteke cross was also palmed away by keeper Schwarzer.

The home side were showing plenty of ambition but the visitors almost took the lead on the counter-attack.

Midfielder Eyong Enoh left Jordan Bowery in his wake and pulled a ball back which Dimitar Berbatov drove wide from just inside the area.

However, Schwarzer was still the busier keeper and the Australian was again called upon when he palmed a long-range N'Zogbia strike over his goal.

The keeper again frustrated the Midlands side when he parried away a Weimann shot before, down the other end, Fulham's Ruiz slid a piercing pass through to Berbatov.

But the Bulgarian striker, who only had Brad Guzan to beat, was denied by the outside of the home keeper's post.

The miss was punished when N'Zogbia latched onto a poor Brede Hangeland clearance before bending a left-foot shot past Schwarzer.

However, the lead was short-lived as Delph - trying to clear Ruiz's corner at the near post - inadvertently headed into his own net.

The midfielder could have salvaged his blushes late on but sent a far-post shot over from close range as the spoils were shared.

"I thought we were great. We should have been a few goals up at half-time and their goalkeeper made some vital saves. I could not fault the lads for effort.

"[In terms of Fabian Delph's own goal] you can never fault anyone for trying to do the right things.

"It [the point] keeps the momentum there. I played under a great manager once and he said if you can't win a game then don't lose it. I think you can sense in the stadium the fans are behind us."

"I thought they were the better team. In the first half, we were a bit hot and cold. The chances they had were created by us.

"If you look at the match, they had won three of four coming into the game, so I can live with a point.

"Our first priority was 40 points and we have achieved that."