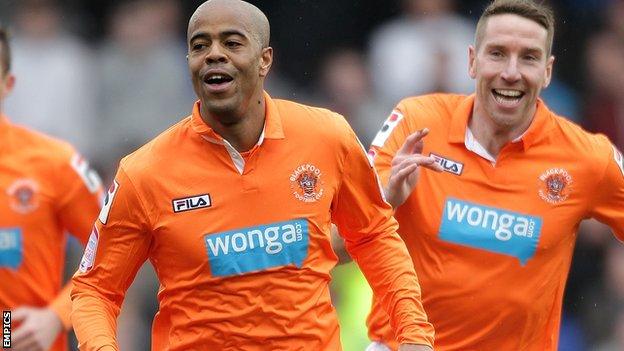 The 29-year-old hit the only goal of the game, hammering a strike into the top corner, after Tom Ince had seen an effort go narrowly wide.

Burnley had their chance when Junior Stanislas' close-range shot ricocheted off the post to safety early on.

Blackpool are now five points above the drop zone, level with Burnley.

Prior to the match Blackpool had lost only one of their last eight games, but the Clarets remained full of confidence having lost only once in five local derbies this season against Blackpool, Blackburn and Bolton.

Bloomfield Road's pitch was not conducive to playing passing football, with a mixture of mud and sand leaving both sides struggling to get a firm foothold in the opening exchanges.

We can't count our chickens at this moment. I don't think we're safe. It's a crazy league, isn't it?

Blackpool manager Paul Ince - writing in his programme notes - described Blackpool as having "got their mojo back" but that did not seem to be the case when Stanislas hit a low drive into the side netting, before Sam Vokes scuffed a shot into the arms of Matt Gilks.

Blackpool's Nathan Delfouneso should have done better when his weak effort on the turn was comfortably collected by Lee Grant. Kirk Broadfoot then shot from 30 yards but his dipping effort went narrowly wide.

The best chance of the half fell to Stanislas, who jinked his way through three Blackpool players to launch a thunderous strike off the post.

At the other end, Ince managed to spin away from his marker to open up a bit of space, only for his shot to go high over.

Burnley had another chance to take the lead minutes before the break when Ross Wallace launched a trademark strike which was expertly tipped over by Gilks.

But it was Blackpool who scored the only goal just before the hour as Sylvestre hit a wonder strike from the edge of the area into the top corner.

Clarets' top scorer Charlie Austin, who was largely marked out of the game, was limited to long-range efforts.

Blackpool should have doubled their lead with seven minutes remaining when Ince let fly only to see his strike bounce off the bar and Matt Phillips somehow headed the rebound wide.

Burnley piled on the pressure in the final minutes with substitutes David Edgar and Martin Paterson both having chances to grab the equaliser but Blackpool held on.

"We got the ball down and played some good stuff, and on the balance of play I think we were very comfortable. We should have scored more.

"We can't count our chickens at this moment in time but what I do know is that it was a vital three points - a must-win game."

"It was a tight affair. They had the better fist of it the first 25 minutes but I actually thought they managed to play on that surface.

"We had pockets of it as the half went on, their keeper made a brilliant save against Wallace which is the best I've seen for quite some time.

"(In the) second half the quality softened because of the pitch - which is the worst I've ever seen in my career and I've played on some bad ones, I can assure you."