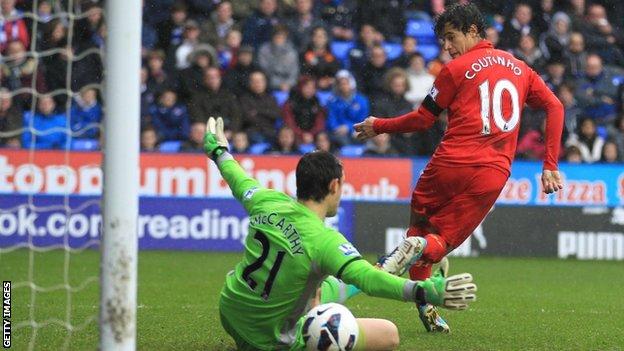 Liverpool's faint hopes of European qualification suffered a further setback as Reading held them to a second successive draw on an afternoon of frustration.

Liverpool had a host of chances, with Luis Suarez going closest with a chip that was cleared off the line.

This was a result that did little to cheer either manager. It was the first time in 14 months that Liverpool had failed to score in consecutive matches and although it ended a run of seven successive defeats for Reading, it did little to keep alive Nigel Adkins' increasingly desperate battle against relegation.

Brendan Rodgers had warned his players of the need to take care of the "ugly bits" in order to mount a late charge for European football next season. Too often this campaign Liverpool have slipped up against teams that, on paper, they should have beaten - undermining their momentum and draining them of confidence.

This was a case in point, an afternoon when both teams marked the 24th anniversary of the Hillsborough disaster, Liverpool were, once again, unable to turn a turn superiority into success, possession into points. Much of that was down to the performance of 23-year-old McCarthy, who was only in the side because first-choice Adam Federici is injured, but Rodgers cut a frustrated figure at the final whistle.

Liverpool should have put the result beyond doubt before half-time. For 45 minutes their front three bristled with menace - Suarez and Philippe Coutinho swapped places at will, eluding markers, confounding plans and slicing through the Reading backline.

The pair almost had Liverpool ahead early on, the young Brazilian playing Suarez through only for his delicately floated chip to be headed off the line by the retreating Chris Gunter. Daniel Sturridge also went close.

Coutinho was providing the vision and the craft, Suarez the quick feet and the jet heels. But while Liverpool dominated, McCarthy stood firm time and time again. He denied all three of the Reds forwards before half-time, tipping Coutinho's low shot wide, pushing Suarez's effort away and denying Sturridge from close range.

Adrian Mariappa threw himself in front of Steven Gerrard's volley, but this was a familiar story for Liverpool - dominant but not decisive, style but no substance.

Within five minutes of the restart Liverpool had the ball in the net, only to see Coutinho's deft back-heeled flick correctly chalked off for offside. As the time ticked away, Reading grew in confidence as they added midfield creativity to their defensive resilience. Liverpool, weighed down by the burden of expectation, lost their way.

Moments after Coutinho's low shot brushed the outside of the post, Reading broke forward to create their best chance of the match. Pavel Pogrebnyak surged down the left and his low cross found Noel Hunt six yards out, only for Reina to deny the Ireland striker with an instinctive save.

The Spaniard made an equally impressive stop moments later, tipping Jobi McAnuff's deflected shot over the bar as Reading sensed an opportunity to snatch all three points. Liverpool continued to threaten, however, but time and again they found McCarthy in uncompromising mood.

The young goalkeeper denied Gerrard once again and twice more repelled shots from Suarez, while McAnuff's late appeal for a penalty was waved away by referee Mark Clattenburg.

"We created enough chances to win a couple of games. We are very disappointed we didn't win. Their goalkeeper was outstanding and on another day the goals go in. I can't ask anything more of the players except that we should have been a wee bit more clinical. It was as good a goalkeeping performance as I have seen in a long time. Young Alex has all the attributes to be a top, top 'keeper. He is 6ft 5in, he has great feet and he has made a series of fantastic saves. But I have got no complaints with my team. Our creativity and movement was very good. But we just didn't do final bit and that is to the ball in the net and that cost us."

"It is three games I have been in charge at Reading now and once again our attitude and application was top drawer. First 15 minutes they had good possession but our players have kept us in the game and we have had a great opportunity with Noel Hunt late on and Pepe Reina has made a great save.

It was an outstanding goalkeeper performance from Alex McCarthy. Has worked really hard to make sure we pick up a point today. It is only a one point, when we need three - we know where we are."