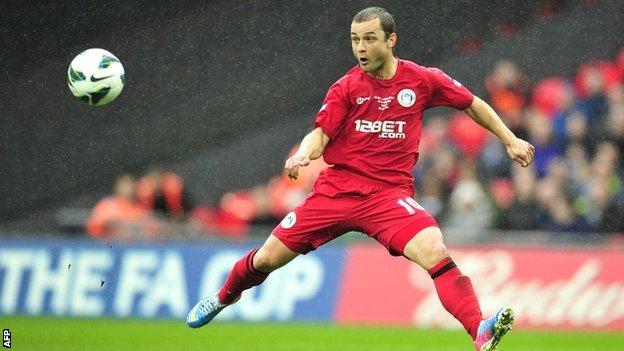 Wigan Athletic reached the FA Cup final for the first time in their 81-year history with a deserved victory over Championship side Millwall at Wembley in a match marred by serious crowd violence.

Shaun Maloney's first-half goal put Roberto Martinez's Premier League side on their way and Callum McManaman secured a meeting with Chelsea or Manchester City next month when he finished off a flowing move 12 minutes from time.

Sadly, however, the occasion was scarred in the closing stages as prolonged fighting broke out in several areas of Millwall's allocated end.

It was an unsavoury conclusion to a game in which the south London side battled gamely but could never match the class of Wigan, who ran out winners with something to spare.

Martinez can now focus his concentration on securing top-flight safety but this was a day of misery for Millwall on the pitch and a shameful one off it as an increasingly tense atmosphere built up throughout the second half before trouble flared.

Many Millwall fans were quick to condemn their own supporters but the fighting took some time to bring under control and is another blot on the club's reputation.

Police using batons moved in to try to stem the violence but some were forced to beat a retreat in clashes with supporters and it took some time to restore a measure of control.

Some fans sustained bloodied facial injuries and one young female supporter was captured on camera in tears as trouble raged around her.

Wigan's supporters, in contrast, were left to celebrate another landmark in the remarkable rise of a club that only joined the Football League in 1978.

This achievement, however, will be overshadowed by what was witnessed in the stands as Millwall's supporters turned on each other once their defeat became a certainty.

For McManaman, though, it was a far happier afternoon.

Less than a month ago he was vilified for his horror challenge on Newcastle United's Massadio Haidara, but against Millwall he caught the eye for all the right reasons.

As expected, given the status of the two clubs, there were vast swathes of empty spaces around Wembley in a crowd of 62,335. It was, however, still a lively atmosphere as the two teams came out.

There had been talk of Wigan chairman Dave Whelan leading the team out but as this was a semi-final and no formal request had been made to the FA, he took his place high in the Wembley stands.

Wigan demonstrated the greater quality in scrappy opening phases and it made the difference when they took the lead. Arouna Kone dropped deep to take the ball on his chest before avoiding the attentions of Millwall's defenders and delivering a perfect cross for Maloney to send a sliding, volleyed finish past David Forde.

The Millwall keeper had distinguished himself with an early save from McManaman and showed great athleticism to turn away an effort from Jordi Gomez following more good work by the dangerous Kone.

The skilful McManaman and Maloney had been posing problems for the Lions and so it proved again in the moments after the restart. McManaman slalomed his way in from the left flank, beating Millwall defenders, but his attempted finish from an acute angle was over-ambitious and flew off target.

Martinez made his first change on the hour as Jean Beausejour was replaced by James McArthur as Millwall finally started to make some headway via set pieces and the aerial power of captain Danny Shittu.

The shift in emphasis prompted Jackett to make a change of his own after 67 minutes, sending on experienced striker Rob Hulse for Jack Smith.

The Latics always held the upper hand and their return to Wembley was confirmed when Kone broke out of defence and Gomez played in McManaman, who rounded Forde to score.