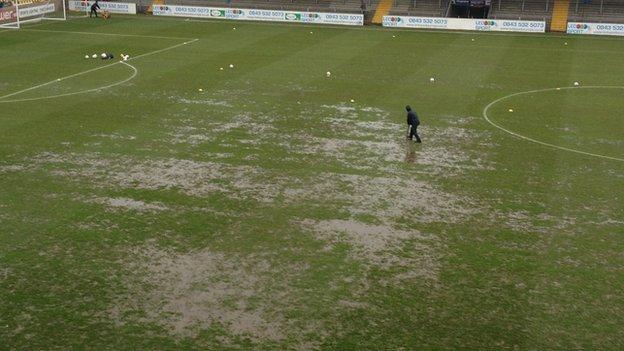 Saturday's League Two game between Torquay and Barnet has been postponed because of a waterlogged pitch.

Heavy rain in the south west left the Plainmoor pitch unplayable and the game was called off at 13:45 BST after a pitch inspection.

Both teams are fighting relegation - Torquay are one place above the drop zone on goal difference while Barnet sit two points above in 20th.

"I think it would have been pretty easy for him to go 'OK, let's play it', but he said to me he didn't want the game decided by the pitch because he knew how important it was.

"I'm obviously disappointed, but you can't so anything about it. You just have to get on with it.

"The situation hasn't changed for us, we've got three games to play and the chance for us to get nine points.

"Now, we have to look at the next game with Morecambe and then whenever this fixture comes around."