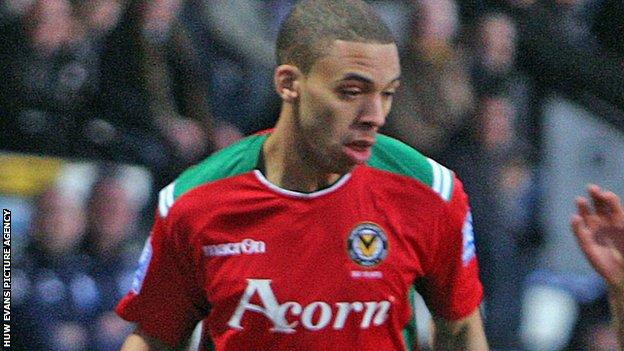 Newport County ground out victory over Alfreton to stay in third place in the Blue Square Bet Premier.

Striker Christian Jolley's left-footed strike on the stroke of half-time gave the Exiles a 1-0 lead at the break.

Substitute Byron Anthony's header on the 67th minute secured the victory for the home side.

Kick-off was delayed by 10 minutes after officials discovered goalposts at one end of the Rodney Parade ground were six inches too high.

That prompted a late start at the ground that also hosts Newport Gwent Dragons and Newport RFC rugby teams.

Newport have already secured a play-off spot but retain only a slim chance of automatic promotion following Kidderminster's win at Wrexham.

The Exiles dominated a scrappy and one-sided game which was played in torrential rain and awful conditions but they were never really troubled by the visitors.

Newport play Luton on Tuesday and the final game of their regular league campaign is against Grimsby.

"It was a bit of a throwback to my time playing out on that pitch but I thought we adapted very well to the conditions.

"I thought it was an evenly fought contest with players using their common sense and a referee managing it well. [It was] a massive three points.

"That's three consecutive victories here inside a week so I'm delighted for the players. There's been a lot of pressure on these players in these last three games."