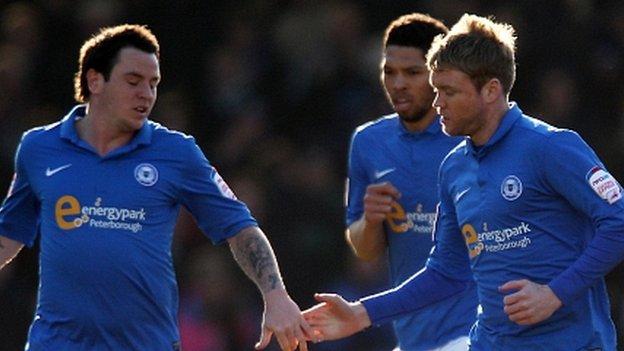 Peterborough moved clear of the relegation zone and struck a blow to their visitors' automatic promotion hopes with a 3-2 win against Watford.

Danny Swanson broke away to score on the half-hour mark before Dwight Gayle doubled Posh's lead after half-time.

Watford staged a late comeback with Mark Yeates and Fernando Forestieri both firing in from outside the box.

However it was not enough to rescue a point, and the result leaves them six points behind second-placed Hull with four games to play.

Peterborough meanwhile, pull one point clear of Barnsley in 22nd, while also extending their unbeaten run to nine matches.

In an open first half, Gayle shot narrowly wide for the hosts, while Forestieri and Nathaniel Chalobah saw chances go begging at the other end.

Posh doubled their lead on the hour, Gayle and Tomlin breaking free from the Watford back-line and exchanging passes before Gayle slotted home.

A packed away end suffered another blow moments later, as last-man Cassetti was judged to have bundled Gayle off the ball just outside the box.

Tomlin stepped up to blast home the free-kick into the top corner of Almunia's net.

As the match drew to a close, Yeates saw his deflected free-kick beat Robert Olejnik before Forestieri struck to ensure a nervy finish for the hosts.

"For 70 minutes we were absolutely outstanding but we were all over the place for the last 20 and that is not good enough at this level.

"Staying in this division could come down to goal difference at the end of the season and those two Watford goals could be costly for us.

"We stopped doing the things that had put us in control but I still have to give the lads credit for another great result. I felt before today that three wins would keep us up and we've got the first of them.

"With four matches to go our destiny is in our hands. We've been on a great run but have to keep that pedal pressed to the floor and continue upping the ante."

"It was a bad day for us and getting automatic promotion will now be very tough, but we will keep on fighting as you never know what can happen in football. We battled on until the end and could even have got a draw if the game had lasted a little bit longer.

"We paid the price for making some stupid mistakes and also for a couple of decisions that the referee could have made in our favour.

"I thought we should have had two penalties which were not given, and it is not the first time this has happened to us. I see things on the pitch that make me believe we have not been treated well and I said that to the referee."