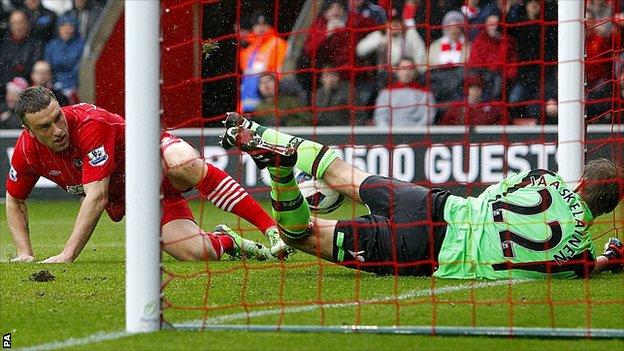 Southampton and West Ham moved closer to sealing their Premier League status with a hard-earned draw at St Mary's.

Gaston Ramirez fired Saints into the lead with a clinical finish after his initial shot was blocked.

"It is a point which takes both sides one point closer to another season of Premier League football. Both goals came in the second half on a rainy afternoon on the south coast. Gaston Ramirez's goal for Saints was cancelled out by Andy Carroll's strike a few moments later."

But Carroll levelled the game with a low free-kick under the Saints wall as both teams moved onto 38 points.

And with the 40-point mark the unofficial target for survival, both sides will now feel comfortable that they will be playing in the Premier League next season.

Southampton, who were promoted with the Hammers last season, have five games remaining while West Ham still have six to play.

Both started brightly despite difficult conditions with a rain-soaked pitch responsible for a first half that was littered with poor challenges.

Artur Boruc was the first keeper to be tested, West Ham captain Kevin Nolan forcing a low save from 12 yards, moments before Ricardo Vaz Te fizzed a shot over the crossbar.

Joey O'Brien was lucky to escape punishment for the Hammers after a late challenge on Morgan Schneiderlin - who himself was booked for diving earlier in the half.

Danny Fox followed team-mate Schneiderlin into the book for an awful lunge on Guy Demel in what was proving to be a physical encounter that boiled over several times.

But it was the hosts who twice came close to breaking the deadlock and both times it was their top scorer Lambert who threatened to add to his 14 goals this season.

First he was denied by a wonderful save from Jaaskelainen who clawed his sliding effort from Ramirez's in-swinging free-kick onto the back post and away to safety.

And then just before the break Lambert flashed a header inches wide of Jaaskelainen's far post from Jack Cork's cross.

Carroll, who had been anonymous in the first half, went close to opening the scoring but inexplicably volleyed wide from eight yards with the goal gaping.

And Ramirez made West Ham pay for that miss, firing Saints ahead with a fierce strike from just inside the box.

Having seen his initial shot charged down by James Collins he collected the rebound before firing past the on-rushing Jaaskelainen.

But Saints could only hold onto their lead for four minutes with Carroll firing his free-kick under the wall and past the wrong-footed Boruc after a slight deflection for what was only West Ham's 10th away goal all season.

Carroll tested the keeper again with a low drive with 15 minutes remaining as both sides tired as a result of the conditions.

The introductions of Jay Rodriguez and Jason Puncheon provided Southampton with a needed injection of pace.

And Rodriguez almost won the game late on with a direct run at the Hammers defence with his rasping low effort well saved by Jaaskelainen as the game ended level.

"I do think we deserved the victory. We worked superbly and were better than them.

"We knew they would be physical and direct but I want to congratulate my players because we managed to impose our brand of football even though the pitch suited them.

"It's a shame we conceded so quickly but it was an unfortunate moment in the game and these things happen in football.

"I'm content, especially considering the virus we had in the squad this week, but unhappy that we didn't get the three points we deserved."

"In the end I thought we were more than comfortable. Away goals have been our problem all season and we again created some simple chances which we didn't convert.

"There are six games left, we have 38 points and are in a nice position in the league.

"We have four games at home, two away, and our home form has been good this season. We should finish strongly, see how many points we can pick up and see where we can finish. I can't see us losing six on the trot with the way the lads are playing."

On his contract situation, he added: "When it is all tied up we want to put pen to paper and then we can move on with next season. I will have a chat with the owners and hopefully by the end of the week I would have secured our future."