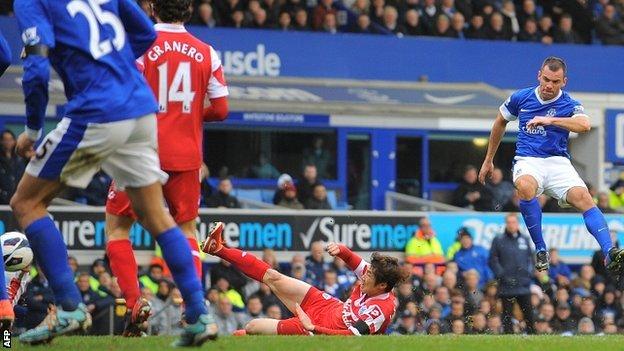 Everton scored either side of half-time to maintain their European challenge and push Queens Park Rangers closer to relegation from the Premier League.

The visitors were in the ascendancy when Loic Remy's shot was saved by Tim Howard after Junior Hoilett's early curler fizzed just wide.

But five minutes before the break, Darron Gibson's shot was cruelly deflected off Clint Hill on its way in.

And, after Everton improved, Victor Anichebe flicked in following a corner.

For periods in the first half it looked as though QPR might continue their three-game unbeaten run against the Toffees since their return to the top flight in May 2011.

But the manner in which they went behind understandably stripped them of confidence and their position looks ever more parlous with only five games remaining.

Harry Redknapp's side remain seven points from safety, but they have now played two more games than their closest relegation rivals Wigan and one more than Sunderland, who face Newcastle on Sunday.

With Rangers having won only four league games all season, Redknapp targeted as many victories again from their final six games, but the prospect of survival must now look even more remote.

Following Arsenal's win over Norwich, David Moyes's Everton stay sixth in the table and face a crucial game against the Gunners on Tuesday. They are still in the hunt for a Champions League spot, as they sit just three points below fourth-placed Chelsea, who have a game in hand.

Everton recorded their fourth consecutive home win but it was QPR who twice came close to permeating the home defence before Gibson's fortunate opener.

When Park Ji-sung laid the ball off to Hoilett, the Canadian's curling shot was a whisker wide before Remy's fierce drive was palmed away by Howard.

The hosts were frustrated by what they thought was some rough-house QPR defending, and with Steven Pienaar back in the side their only real threat came when the South African combined with Leighton Baines down Everton's left.

Baines crossed low for Kevin Mirallas and, when the Belgian's effort came back to Gibson, his shot cannoned in off the luckless Hill for the Irishman's second Everton goal.

Coming six days after his side conceded a crucial injury-time equaliser against Wigan, Redknapp looked absolutely sick on the sidelines and with some justification.

Problems then mounted for his side as Everton emerged after the break as a completely different proposition.

They were far quicker to the ball and passed with extra vitality as they conjured a number of chances, putting QPR under pressure from a succession of corners.

Mirallas tricked his way past Nedum Onuoha and crossed low to Anichebe but the Nigerian smacked his shot against the post from eight yards.

He made up for that miss, though, when he flicked in Distin's header from another accurate Baines corner.

It was no more than Everton deserved and they could have made the scoreline more comfortable when Mirallas twice had shots saved by Julio Cesar.

Onuoha had a solitary effort for QPR as the game petered out miserably for them. With few chances to make amends now, their season could go the same way.

"He should do more but he has a thigh problem and we were nearly having to take him off. We think he will need an operation at end of the season so he has been reticent to shoot and take things on but it got a big deflection which helped us as well.

"It's a really important three points, I was worried about today's game. QPR have a lot to play for but they are nearly getting to a situation where there's not much to play for.

"I think if we beat Arsenal in midweek we can talk about the Champions League but if we lose we are more talking about trying, if possible, to finish in that Europa League place."

"It was another blow, last week was a massive blow at home to Wigan. Everton is always a difficult place to come but at half-time I thought we were unfortunate to be 1-0 down.

"The goal was a massive deflection and we came in at half-time feeling sorry for ourselves.

"You have to keep going, you can't suddenly feel sorry for ourselves… but we started sloppy and became undisciplined, we didn't do our jobs properly, we gave free-kicks away, we kicked the ball away, we got bookings. It didn't do us any favours.

"We have to believe, we have to beat Stoke, we have to go to Reading and win, we have to win the other two home games against Newcastle and Arsenal. I know it's tough and it's going to be very difficult but while you've got a chance you have to keep going."