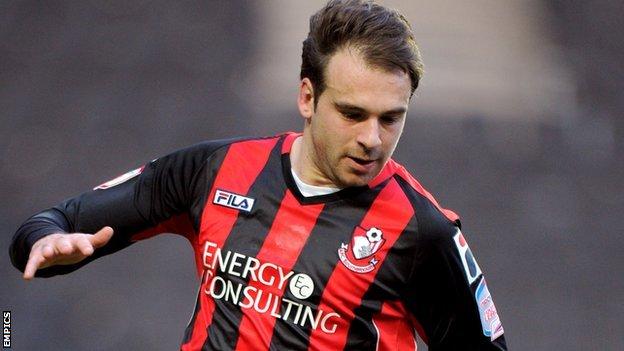 Bournemouth took a big step towards promotion to keep up the pressure on Doncaster in the League One title race by cruising to victory at Shrewsbury.

The Cherries made a flying start, Brett Pitman converting an early penalty after James Hurst's foul on Marc Pugh.

Pitman, who has scored in all of his last seven games, took his tally to 18 after curling home from 25 yards.

They completed victory when Pitman's header was sliced into his own net by Shrewsbury defender Jermaine Grandison.

"It was difficult to watch today. Bournemouth are up there for a reason. They outworked us and, by these standards, they deserve to be near to the top of the league.

"We've been beaten by a better side. What we have to do now is win one of the next three games. We have to be prepared to be ready for Colchester next. That is the simple truth of it all.

"We didn't help ourselves with the penalty - and with the goals after half time.

"We defended shambolically and we have nothing to complain about."

"When you've got a striker in the form of Brett Pitman who is scoring goals like his second goal - which was a fantastic finish - it certainly makes it easier.

"But it was an all-round team performance again. We kept the ball well on a really difficult surface and played very well, so I'm delighted.

"We've made it difficult for ourselves in recent weeks, when we've dominated games and we've only won by the odd goal and had to defend with our lives.

"I see a steely determination in the group. I don't see flamboyance or any big gestures or any sign that we're ahead of ourselves."