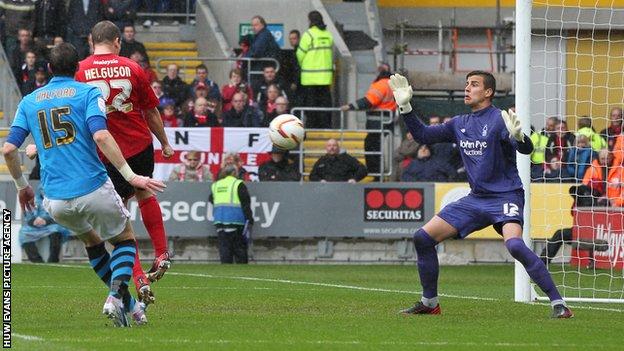 Rudy Gestede scored twice as Cardiff edged to within a single point of promotion to the Premier League with an easy win over Nottingham Forest.

Forest were reduced to 10 men before the break when Darius Henderson was dismissed for a stray arm on Helguson.

Watford's defeat at Peterborough means Cardiff are now 12 points clear of at the top of the Championship with four games remaining.

A point against Charlton at home on Tuesday would secure Cardiff's promotion to the top flight.

In the cagey opening period played on a sodden pitch, the home side's Craig Bellamy and the visitors' Adlene Guedioura traded long-range efforts before Helguson's shot dipped wide of the post.

Another effort by Bellamy went wide before the breakthrough came on 26 minutes when Cardiff were awarded a free-kick following Greg Halford's foul on Kim Bo-Kyung.

Bellamy's curling free-kick into the area found the unmarked Helguson at the far post, who headed home past Karl Darlow.

McGugan thought he had levelled the scores when he got the better of Aron Gunnarsson and curled home, but he was deemed to have fouled the Iceland international.

Striker Henderson then wasted a glorious opportunity to equalise after Marshall could only parry Henri Lansbury's strike.

The rebound found its way to Henderson, who could only stand on the ball before the Cardiff keeper pounced to recover.

Forest's hopes were dealt a blow three minutes before the interval when they were reduced to 10 men following Henderson's dismissal.

The defender's arm caught Helguson in the face as both players challenged for the high ball and the referee adjudged it to be a straight red card offence.

The sides had been evenly matched up until Henderson's dismissal and Cardiff made the most of their numerical advantage in the second half.

Forest's woes continued after the restart when Halford was carried off after being caught in the face by Gestede's leg as he attempted a clearing header.

The home side were now fully in control and another free-kick from Bellamy clipped the outside of the post before they doubled their advantage.

Forest failed to clear the danger and from Andrew Taylor's left-wing cross substitute Gestede rose above the defence to power home a header to double Cardiff's lead.

Darlow made good saves to deny Kim and Bellamy before Leon Barnett flashed a header wide while, for Forest, McGugan fired over the bar.

Efforts from Bellamy and substitute Craig Noone hit the post late on as Cardiff secured victory to put them on the brink of promotion.

"I was pleased with how we played up to the sending-off against a team who are really on form. We had to go toe to toe from the first minute and we did that.

"We got the goal and then after the sending-off it can be difficult to play against 10 men but we were absolutely on the money.

"We now have a game against Charlton, against who we gave our poorest performance of the season at The Valley, and we know we will have a tough game against them here."

"I don't think he [Henderson] intentionally put his elbow up to the boy's face. I think his elbow has risen and connected with his face, but under the rules I don't think we can have any complaints about the red card at all. The referee had no choice.

"The run had to come to an end at some point. We have four games left and we know we need at least two wins. There will be plenty of movement in the coming weeks but it's the table at the end of the season that matters. It's all to play for."