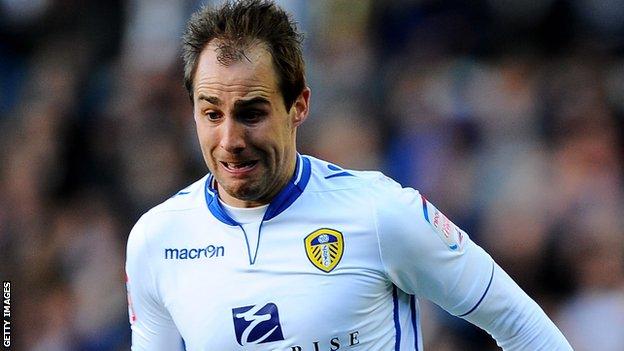 Luke Varney scored twice in the second half as Leeds came from behind to beat Sheffield Wednesday in Brian McDermott's first game in charge.

The visitors dominated the first half and deservedly led through Jermaine Johnson's lofted finish.

But Leeds were much improved in the second period and equalised when Varney's header hit the underside of the crossbar and bounced over the line.

Varney then headed in Ross McCormack's cross to complete the turnaround.

After a run of four successive defeats the win all but secures Leeds's Championship status for next season as they move on to 55 points.

Former Reading manager McDermott, who took charge of Leeds on Friday, was given a rousing reception by the home fans when he was introduced to the crowd shortly before kick-off.

But cheers quickly gave way to frustration as Leeds looked decidedly off key against a Wednesday side who had won three of their previous four games.

Steve Morison completely missed his kick just yards from goal in the sixth minute while Rodolph Austin shot wide from 30 yards before sending a free-kick harmlessly over the visitors' goal.

Leeds fans became increasingly restless as the half wore on, fearful that a run of seven games without a win was about to be extended.

Those fears were only heightened when Wednesday took the lead just before the half-hour.

A long ball downfield found Jeremy Helan, who in turn fed a pass to Johnson on the edge of the area and the forward coolly lifted the ball over Leeds goalkeeper Paddy Kenny.

The goal clearly deflated Leeds and Wednesday finished the half strongly as Leroy Lita's glancing header was caught by Kenny, who then kept out a stinging free-kick from Miguel Llera.

But McDermott's half-time team talk appeared to have the desired effect as Leeds took control of the game after the break.

The introduction of El-Hadji Diouf also helped and his deflected shot flew just wide before Varney also saw a decent effort directed behind the Wednesday goal.

But former Wednesday loanee Varney was not to be denied in the 63rd minute, rising unmarked to meet McCormack's cross and his header bounced down off the bar and over the line.

The pair linked up again barely six minutes later to put Leeds ahead. McCormack this time navigated his way through the Wednesday defence before crossing for Varney to glance another header into the net.

Wednesday rallied in the closing stages and pressured the Leeds defence. Substitute Steve Howard hit the post with a volley before Lita dragged a shot wide when well placed.

However, Leeds held on to ensure McDermott made the ideal start to his career at the West Yorkshire club.

"I was really pleased. It was hard in the first half and we knew we shouldn't have gone in a goal down but there was a good response after the interval, which was really important.

"They were two very well-worked goals. The first was just over the line so I am glad the referee and linesman spotted it and the second was a fantastic bit of skill from Ross McCormack and a really good header by Luke Varney.

"Sheffield Wednesday have been on a good run. You have to give them credit for that, so it was a really big win for us."

"We should have won. We switched off for 15 minutes and allowed two goals which we should never have allowed. You can't give somebody free headers in your box.

"It's frustrating because they caused us no hassle, apart from a 15-minute period.

"We had a few injuries and had to change things around but we made some basic errors."