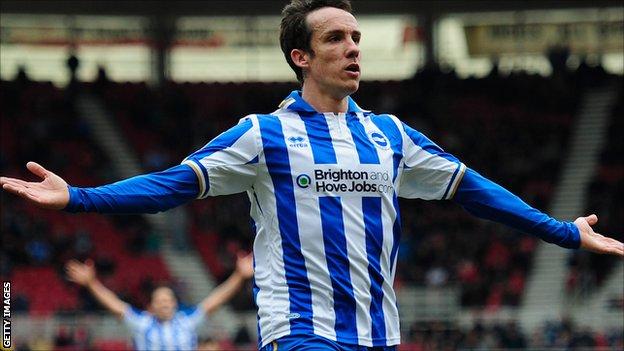 Brighton moved up to fifth in the Championship as they ended a three-match winless run with a comfortable win away at free-falling Middlesbrough.

Orlandi opened the scoring by side-footing past Jason Steele for his fifth league goal of the campaign.

And Lopez sealed the points by lobbing the on-rushing Steele after Liam Bridcutt's pass had sent him clear.

Brighton now have four games remaining against Peterborough, Blackpool, Leeds United and Wolves as they look to seal a play-off spot.

For Tony Mowbray's Boro, they are down to 10th after their sixth defeat in their last seven games - and lie eight points off the top six, and just six points above the bottom three.

Neither side managed to find any kind of rhythm in a poor first half, with a deflected shot by Scott McDonald that went wide of Casper Ankergen's post and an Andrew Halliday effort from the left which fizzed across the face of goal was the best either side could muster before the interval.

But the game improved in the second half and Dean Hammond went close to breaking the deadlock for Brighton after he was found in the area by Jose Ulloa's terrific pass, but the midfielder was unable to steer his header on target.

Then the home side went close as Wayne Bridge gave the ball away and Boro broke quickly, with Merouane Zemmama releasing McDonald down the right only for the Australian's effort to fly over the crossbar.

But it was the visitors who eventually broke the deadlock. Hammond squared from the right for Orlandi, whose run into the area had gone unnoticed by the Boro defence, and the Spanish midfielder finished past Steele.

They had Gordon Greer to thank for preserving their lead as the defender made two vital blocks in as many minutes to deny McDonald and Curtis Main from getting shots at goal.

Orlandi had a chance to add a second but could only fire wide from the edge of the area, but Gus Poyet's side sealed the victory as Lopez was sent clear by Bridcutt and he beat Steele to ensure his side remained in the top six.

"I'm not someone who gives in. It is not something I have considered.

"We know the situation we are in isn't great. We know this recent run of results has not been good enough. Everyone at the club is bitterly disappointed about the situation.

"But my nature is to dig in. It is my job to put things right.

"Ultimately you have to ask the chairman about my situation but he is from Teesside like me and I am sure it is in his nature to dig in too."

"We had to inject our own passion.

"In the first half the game was very slow and the ground was very quiet and sometimes that can creep into your head and into your game.

"We were comfortable in the first half but we needed more. I told them [the players] to go and create their own passion, to make their own tempo and they did that and it made a difference.

"I knew that if we could only get the first goal it would be better for us. With the players we had on the pitch it makes it very hard for Middlesbrough to score a goal."