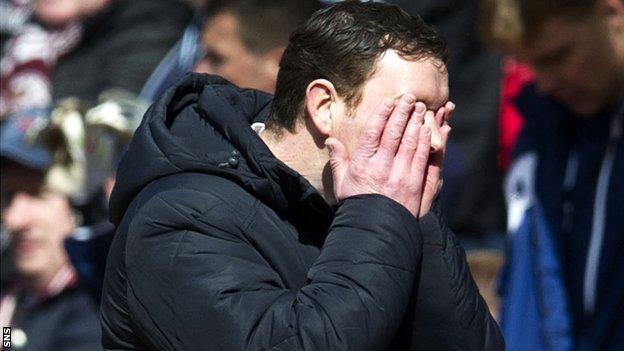 Steffen Wohlfarth's second goal of the day put County 2-1 ahead but three goals in the last 11 minutes gave the hosts victory.

"It's ridiculous the way we've lost the game," said Adams.

"We should've probably have been 4-0 up at half-time with the chances we created. They were excellent chances."

Wohlfarth impressed with a fine first-half strike and a powerful header after the break but his team-mates were less clinical in front of goal.

"I thought we were in total command of the game for a large majority," Adams told BBC Radio Scotland. "We were one-on-one with the goalkeeper a number of times.

"What we haven't done is defend our 18-yard box well enough. It was totally ridiculous how we defended.

"Hearts took their chances when they came along and if our chances had been taken it probably would've been 10-4."

County were already assured of a top-six place in their debut Scottish Premier League season and Adams is beginning to plan for next term.

"We've got five games to go and our season has been terrific," he added.

"We just want to keep going. We look to next season and look to see what we can do player-wise."