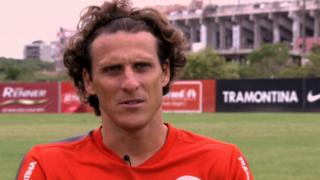 Former Manchester United striker Diego Forlan reflects on a career that has taken him around Europe, to a World Cup semi-final, and back to his native South America.

The 33-year-old is now playing his football for Brazilian side Internacional and is enjoying the twilight of his career.

His international future hangs in the balance with Uruguay struggling to qualify for the 2014 World Cup after a disastrous start to their campaign.