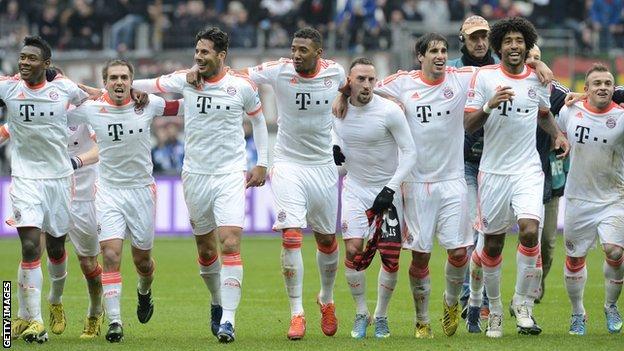 Bastian Schweinsteiger scored the only goal of the game at Eintracht Frankfurt with a lovely back-heeled finish.

Bayern have lost only once all season, conceding 13 goals, and have won all 11 games since the winter break.

Defending champions Borussia Dortmund beat Augsburg 4-2 but are 20 points behind.

"The fact that we have won the title after 28 games is extraordinary, it's simply fantastic," said manager Jupp Heynckes, who is moving aside at the end of the season to allow Pep Guardiola to take over.

"One of the things FC Bayern have demonstrated this season is that we're a top side, but we have done it with harmony in the team."

Schweinsteiger's solitary goal came as captain Philipp Lahm crossed for him to delicately flick a shot past the goalkeeper.

Meanwhile, Dortmund's win was of no consequence, relinquishing their hold on the league trophy that they have won for the previous two seasons.

Bayern remain on course for a league, domestic cup and European Cup treble - something the German team have never achieved.

They are unbeaten away from home so far this season, and with 75 points accrued thus far, are on course to beat Dortmund's record tally of 81.

After sealing their 23rd title, Bayern can now focus on other competitions.

Leading 2-0 after the first leg of their Champions League quarter-final against Juventus, Heynckes' side are favourites to progress into the last four, and could set up a clash against rivals Dortmund, who drew 0-0 against Malaga.

They face Wolfsburg in the semi-finals of the German Cup, looking to lift the DFB-Pokal trophy for the 16th time.