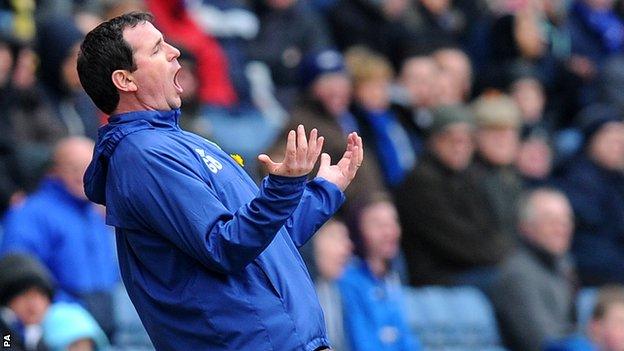 Blackburn caretaker manager Gary Bowyer is confident his side can avoid the drop and says they can claim 18 points from their remaining six games.

Rovers fell into the Championship's bottom three following a 3-2 defeat at Sheffield Wednesday on Saturday as a 10-match winless run continues.

"We can get 18 [more points] but our luck has to change," said Bowyer, the club's fifth manager of the season.

"Matters off the field don't help, but they are out of our control."

In what has been a turbulent campaign for the Lancashire club, Steve Kean began the season as Rovers manager before being "forced to resign" in September with Eric Black taking over as caretaker boss ahead of Henning Berg's arrival in October.

The Norwegian lasted only 57 days in charge and Bowyer began his first stint as caretaker before Michael Appleton was appointed in January.

Bowyer is now in his second spell as temporary boss as Appleton was sacked in March after 67 days in charge.

There is further unrest off the field as managing director Derek Shaw has been told to stay away from Ewood Park during an investigation into the compensation owed to Berg.

On the field, Rovers have continued to struggle with their last league win coming against Ipswich in February and they are a point adrift of safety, but have played a game fewer than Huddersfield who sit in 21st.

"We aren't going to feel sorry for ourselves; it's in our hands still as we have a game in hand," said Bowyer.

"Of course it's difficult, it's a difficult situation, but I'm not going to shirk, I'm going to give it my best shot, we can only fight. The players care, they really care."

Scott Dann's header brought Blackburn level but Johnson won it for the hosts with a spectacular 25-yard shot.

However, Bowyer was unhappy with the officials for awarding Wednesday their first-half penalty when Josh Morris was adjudged to have fouled Reda Johnson in the area.

Bowyer said: "Their lad's a big lad and he goes down like he has been hit by a truck. No disrespect to our lad, but our left-back Josh Morris isn't built like a truck.

"The linesman possibly crumbled under the pressure a bit. These are the things that change games."

The Owls have moved up to 18th on 50 points, three clear of the bottom three, but manager Dave Jones believes there is plenty of work to do.

"They are all hard games - we showed a lot of character, a lot of determination and a lot of grit and that is what you will need, not just good play."