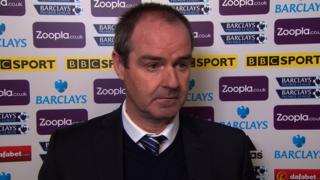 West Brom boss Steve Clarke says his side deserved a share of the points after slipping to a 2-1 defeat by Arsenal at The Hawthorns.

Two goals from Tomas Rosicky put the Gunners in control before a James Morrison penalty and Per Mertesacker's sending off gave the Baggies hope of snatching a draw.

West Brom have only won once in their last five Premier League games.