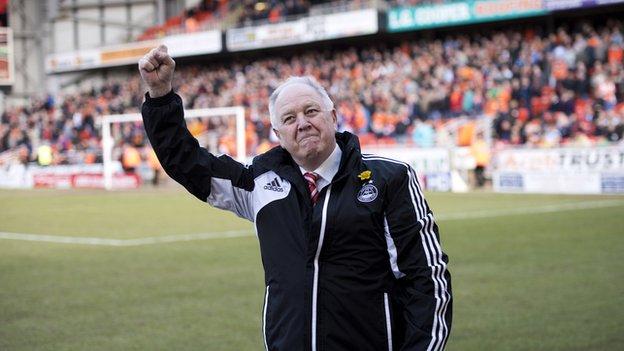 Craig Brown ruled out returning to the dugout after he signed off as Aberdeen manager with a defeat.

condemning them to the bottom six.

Brown will officially hand over the Pittodrie reins to Derek McInnes on Monday, and has no plans to return as a first-team boss.

"I've had a couple of offers to do some coaching, but I'm not thinking of going into football management," he said.

"I'm not phoning looking for a job, I'll never apply for a job. I would think I would be honoured and privileged to stay on the board at Aberdeen."

With Dundee defeating Kilmarnock, a win for either side at Tannadice would have netted a place in the top six.

Brown was desperate to bow out on a high, but his team were second-best, much to the disappointment of the travelling support in excess of 3,000.

"We had a fantastic support here," said Brown. "They sang and they shouted throughout the match, and driving back up to Aberdeen with that big let down at the end must be a major disappointment.

"My heart bleeds for them because no fans could be more supportive than ours today.

"In the first half there was nothing in it and, if anything, we were slightly the better team. In the second half the arrival of [Gary] Mackay-Steven gave a major boost to Dundee United.

"Had we just wanted a draw I think we could have got it, but what I did was send Russell Anderson up front with 10 minutes to go, and of course that left more gaps at the back.

"We took a chance to try and get the winner and by so doing in actual fact conceded the winner to the opposition.

"They were breaking away at speed, we had three at the back, it was man-for-man and that really cost us the game."

With Brown ready to take up a director's post at Pittodrie, he is confident the club can enjoy success next season.

"[Former director of football] Willie Miller has left a legacy of very good young players, and they'll come through to help the next manager," added the former Scotland boss.

"I'm sure Aberdeen will be a power next season."