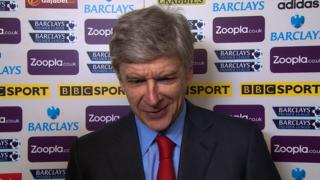 An under-the-weather Arsene Wenger is left hoarse but relieved after his side hold on for three vital points against West Brom.

Two goals from Tomas Rosicky gave Arsenal the lead but a James Morrison penalty meant the Gunners, who had Per Mertesacker sent off, had a nervous wait before securing the win.

It was Arsenal's sixth victory in their last seven league games and moved them in to the Champions League places, ahead of Sunday's fixtures.