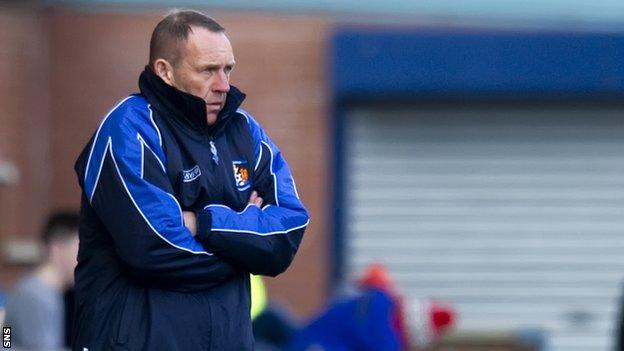 Kenny Shiels said he accepted responsibility for Kilmarnock's failure to secure a place in the Scottish Premier League's top six.

The 2-1 defeat by Dundee enabled Dundee United to claim sixth spot with a late winner against Aberdeen.

"We just didn't deliver," Shiels said. "I have to accept responsibility as I'm the one who selects the team.

"I don't want people to blame the players and I'm very low at the minute."

Kilmarnock were poor but did draw level through Kris Boyd, only for Harkins to grab his second with a powerful strike.

And the hosts failed to live up to their supporters' expectation, who booed at the whistle.

"People at the club and the supporters trusted me and I just didn't deliver," Shiels commented. "I feel really down and I have to take the blame for most of it.

"There were nerves there and the players were trying to play long balls to Boydy, which wasn't us and that was to our detriment.

"We ended up lacking invention and I'm really disappointed. You put the whole season into this particular opportunity to get into the top six with two home games and you need to win one of them.

"We get one point from six and it's just hard to take. I have to accept responsibility for that.

"I'm really sorry for the supporters but what can you do? There's no other way you can apologise and I've got to ensure I do better for the next game."