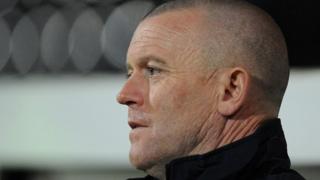 Forest Green Rovers manager Dave Hockaday tells BBC Radio Gloucestershire that his side were bullied during their 2-1 defeat at Tamworth in Blue Square Bet Premier.

Hockaday says the performance was unacceptable and that he will call his players in for extra training on Sunday.

Rovers are now eight points off the play-off places with four games of the season remaining.