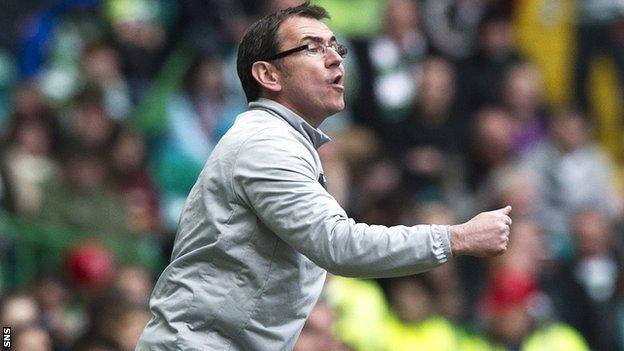 Pat Fenlon has warned his Hibs players they risk missing out on a place in the Scottish Cup final if they continue to perform as they did at Celtic Park.

a week before taking on Falkirk in the cup semi-final at Hampden.

Fenlon said: "If we perform like we did today, it doesn't matter who we play, we won't get anything out of the game.

"We didn't have enough commitment around the pitch."

Fenlon's side have won only one league game in 2013 and the defeat by Celtic confirmed Hibs' place in the bottom six, with the SPL splitting in two for the final five fixtures of the season.

"I don't think we showed up," lamented Fenlon. "I think we accepted we were going to be in the bottom six and we didn't give it a go.

"That's not good enough. That's what's been wrong at this football club, there's been acceptance of losing football matches. That can't continue.

"The season has been a bit of a failure. We wanted to be in the top six. We started off really well but we haven't shown enough hunger and desire in the last five or six weeks to maintain that.

"I feel you're judged on winning league games and we haven't won enough over the last six or seven weeks.

"We've got to have more commitment, more desire to stop goals going in, stop crosses coming into the box, stop people being able to turn too easily in the box and we didn't have that."

"We've got a semi-final to look forward to, which is great," added Fenlon.

"It's a massive game, Falkirk are a decent side. I've watched them three or four times.

"We owe our supporters after last year's disaster in the cup final. We owe them another day to get back there and say 'can we put that right?'"