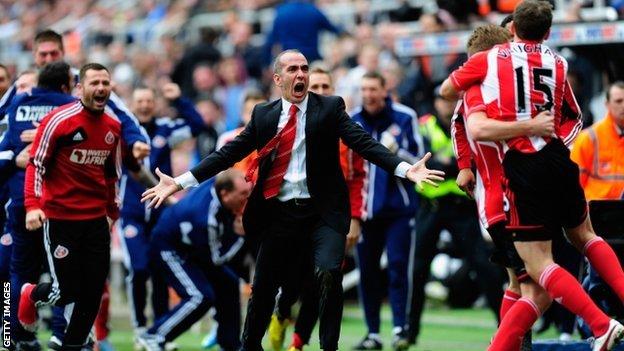 Paolo Di Canio masterminded Sunderland's first victory at St James' Park in 13 years to give their Premier League survival hopes a massive boost while dragging Newcastle into the relegation scrap.

In only the Italian's second game in charge, his team delivered a devastating blow to their arch rivals as Stephane Sessegnon's first-half goal was followed up by strikes by Adam Johnson and David Vaughan late in the second period.

The manner of the victory will give fresh hope to the Black Cats, who moved three points clear of the relegation zone with five games to go and to within two points of Alan Pardew's side.

The enthusiasm, passion and celebrations from Paolo Di Canio rubbed off on the Sunderland players on the pitch. Their counter-attack capabilities were also well organised, and they caught Newcastle with sucker punches all day

And it also looked to have justified the surprise dismissal of former boss Martin O'Neill as Di Canio's side reversed their slump of nine games without a win in some style.

If the Italian's appointment was intended to garner a response from the team, then it was met in stunning fashion in a victory which Sunderland richly deserved.

The charismatic, and sometime maligned, manager celebrated all three goals with typical verve and went onto the pitch after the final whistle to revel in an historic performance from his side, which will go a long way to establishing his status as a saviour should the club stay up.

Newcastle fans were warned about their behaviour prior to the game as there was speculation they could taunt Di Canio with fascist salutes given his political past.

But thankfully, the game was remembered for the performance on the pitch in a highly charged atmosphere as Sunderland withstood first-half pressure to take control.

Before Sunderland took the lead, they had two penalty claims with the first - when Steven Taylor pulled Danny Graham's shirt - looking like the visitors had a case.

The noise during the opening exchanges was immense, but the majority of St James' Park was stunned into silence when Sessegnon picked up Jonas Gutierrez's loose ball, drove at the Newcastle defence and squeezed a shot past Tim Krul.

Di Canio sprinted down the touchline and leapt into the air in delight, but he soon regained his composure to deliver careful instructions to his troops.

The Newcastle response came almost immediately with Simon Mignolet twice producing good stops to deny Papiss Cisse and it helped to restore a measure of control for Sunderland.

Indeed, the visitors could have gone further ahead before the break when Carlos Cuellar climbed highest to head Sebastian Larsson's corner towards goal, but Krul made an assured save.

Newcastle's desperation to get an equaliser then boiled over on a couple of occasions as Cisse and Steven Taylor went into the book, with Danny Rose also cautioned for a stern challenge on Mathieu Debuchy.

Despite some scares, Sunderland were marshalling Cisse quite well which was enough for Pardew to bring on Shola Ameobi up front and later introduce Hatem Ben Arfa in an attempt to yield an equaliser.

Having tested Mignolet again after the hour mark, Cisse then had a goal wrongly ruled out for offside, as he was played on by Cuellar following a free-kick, and it proved a turning point.

Newcastle had to replace the injured goalkeeper Krul with Rob Elliot but the new addition could do nothing as Johnson countered and then struck a delightful curler into the top corner.

That put Sunderland fans and the visitors' bench in wonderland, but more delight was to come when again they broke forward, and substitute Vaughan stayed onside to drive another stunner into the top corner with eight minutes left.

Di Canio's name rang around St James' Park, a prospect that few would have anticipated at the start of the game.