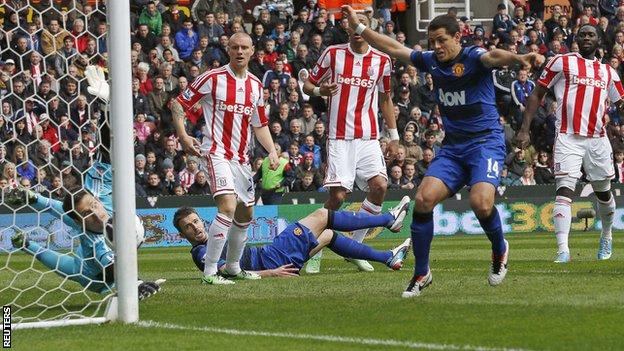 Manchester United moved to within seven points of securing a 20th league title with a routine win that pushed Stoke further towards the relegation zone.

Robin van Persie made sure of the points with a second-half penalty that ended a run of 10 games without a goal.

That came after Michael Carrick had given United the perfect start, prodding home from a scrappy corner.

Stoke on the slide

The result leaves Stoke only three points above the bottom three, having won two of the last 17 league matches.

This was a performance and victory typical of United's season, one that owed more to perspiration than inspiration. With it, Sir Alex Ferguson's side once again open up a 15-point gap at the top of the Premier League.

Stoke, however, are falling down the division.

One victory in their past 14 matches, one clean sheet in 15 league games, one point from seven matches - the statistics read like relegation form for Tony Pulis's men. And while a defeat by United may not decide their fate, crucial matches against Queens Park Rangers, Norwich and Sunderland in the weeks ahead, almost certainly will.

Ferguson took nothing for granted, however. Consecutive defeats by Manchester City and Chelsea had hurt, but from the moment Carrick put United ahead there was never a chance of the champions elect losing a third successive match for the first time since May 2001.

Yet, when the opening goal did come, it was from an altogether more straightforward source, as Carrick toe-poked a low shot into the bottom corner after Van Persie's right-wing corner had been helped on by Phil Jones.

It was United's 100th goal of the season and it seemed the 101st would follow soon after, as Rooney stung Asmir Begovic's palms with a rasping drive and then fizzed a free-kick just wide of the goalkeeper's right-hand post as half-time approached.

But Stoke tackled, battled, denied space - Robert Huth heading a free-kick a yard wide and Kenwyne Jones making a nuisance of himself. The work-rate was admirable too, City players often doubling up on United's main threats like Kagawa, while Van Persie found he had unwelcome, unstinting company.

Jonathan Walters scooped his shot over early in the second half, United goalkeeper David de Gea held a drilled effort from Charlie Adam before Jones rifled another effort over, but United weathered the storm. Van Persie found space to collect Hernandez's clever pass, only to steer his shot into the side-netting from a tight angle.

If that was a warning shot, the decisive strike came soon after. Once again Van Persie found space, he bedazzled Andy Wilkinson by cutting in, feinting and twitching his way into the box, where he was brought down by the Stoke defender for a clear penalty.

The wind blew the ball off the spot as Van Persie stepped up to end his 751-minute goal drought, but the Dutchman would not be denied, tucking his shot low beyond Begovic's left hand and into the corner of the net. He ran to Ferguson on the touchline, where the pair embraced knowing the league title is almost United's.

"We are a game closer - the important thing is not to take our eye off the ball. Coming here is always a difficult game, with the wind blowing the ball all over the place. But the players stood up to that, they persevered and it was an important victory. Robin [Van Persie] showed fantastic composure and concentration and he hit the perfect penalty - it was a great celebration. I thought Wayne Rooney looked very confident, he needs a little boost in his confidence. He is like any other player that doesn't hit the heights that people expect, or that he sets for himself, he needs a little confidence boost."

"We shot ourselves in the foot. We conceded from a set piece early on, that just settled United and that took the steam out of us. For the second goal, the penalty, if Andy [Wilkinson] stays on his feet you've always got a chance at 1-0. Two poor goals have just killed the game for us. "