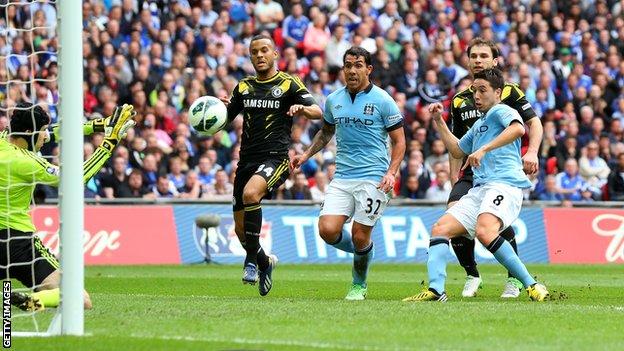 Manchester City will meet Wigan Athletic in the FA Cup final after winning an enthralling Wembley encounter with Chelsea.

The 2011 winners looked on course for a comfortable victory as goals either side of half-time from Samir Nasri and Sergio Aguero gave them the lead their dominance deserved.

Chelsea, to their great credit given their recent arduous schedule, somehow summoned up reserves of strength and resilience after Demba Ba's stunning goal set up a grandstand finish that could have forced extra time.

Chelsea were very good in the last 30 minutes. The change to bring on Fernando Torres had a fantastic effect immediately. From then, it was all Chelsea. You need someone to find space in the box, and could you name a better player to do that than Frank Lampard?

The rejuvenated holders pressed for an equaliser that seemed unlikely for long periods and it took some key interventions from Joe Hart's deputy Costel Pantilimon, particularly from Ba, to assure City of a return to Wembley next month.

And substitute Fernando Torres was furious when referee Chris Foy refused his claims for a penalty in the closing moments when City captain Vincent Kompany pulled his shirt as he raced into the area.

Roberto Mancini's side may be on the brink of losing their Premier League title to Manchester United - but the prospect of silverware for a third successive season keeps their campaign very much alive and they delivered a real show of power for the first hour.

Chelsea interim manager Rafael Benitez will now turn his attention back to the main business of finishing in the top four to ensure Champions League football next season, as well as attempting to win the Europa League.

This was a clash of two of the Premier League's heavyweights and they traded blows to such an extent that many of the players had run themselves to a standstill by the final whistle.

As expected Benitez left the experienced duo of John Terry and Frank Lampard on the bench following their Europa League endeavours against Rubin Kazan in Moscow on Thursday.

And Chelsea's punishing programme appeared to make an impact with a slow start that allowed Manchester City to build instant momentum.

Chelsea keeper Petr Cech had to show quick reflexes to turn away Aguero's effort after he touched on Yaya Toure's shot and was also in action to turn away Carlos Tevez's angled effort at his near post.

It was all hands to the pump for Chelsea as City pressed, with both Branislav Ivanovic and Ryan Bertrand pressed into action to make crucial blocks.

City manager Mancini maintained his FA Cup policy of preferring Pantilimon to England keeper Hart - and he was grateful to captain Kompany for a headed clearance off the line as Eden Hazard's shot broke the shackles on Chelsea.

The goal City merited duly arrived 10 minutes before half-time. Chelsea had not been able to cope with Yaya Toure's forceful surges from midfield. He set up another opportunity for Aguero and when his effort bounced invitingly off Cesar Azpilicueta for Nasri, he made no mistake.

City should have doubled their lead in first-half stoppage time when they broke with five against three in their favour. James Milner's cross was poor but Cech's punch still found Kompany, who should have done better than shoot off target.

It was not to prove an expensive miss as City did get their second two minutes after half-time. A quick free-kick ended with Gareth Barry crossing for Aguero, who showed the superb natural movement and instincts that come naturally to world-class strikers, to rise and head in off the post past the motionless Cech.

As the minutes ticked away Benitez introduced Torres. A goal came within seconds of his arrival but it came from Ba, with the swivelling acrobatic finish that is becoming his trademark as he escaped from Kompany to hook his finish beyond Pantilimon.

The keeper was then forced to dive at Juan Mata's feet amid panic in the City penalty area before reacting well to turn away Ba's shot as Chelsea were suddenly, improbably, resurgent.

In a chaotic final phase, Aguero appeared to trample on David Luiz after bringing him down, which brought some instant retribution from the fired-up Torres.

And Torres was involved in the final contentious moment when his shirt was pulled by Kompany - but referee Foy was unmoved and City survived.