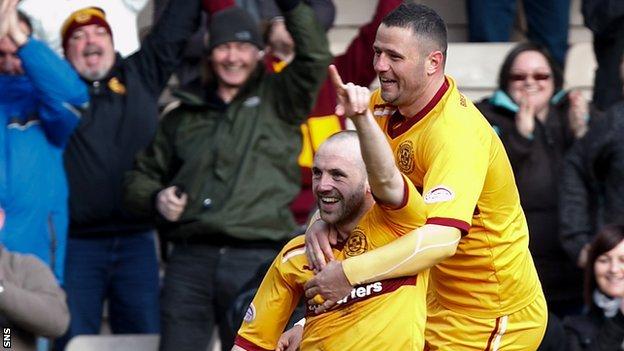 Motherwell manager Stuart McCall expects the rest of the season to be "thrilling" as he targets a place in next season's Europa League qualifiers.

in the last round of fixtures before the Scottish Premier League splits.

"Some of our football was outstanding," said the Fir Park boss.

"We now go into the split with five huge games. If we can keep that level of performance up then we'll have a really good chance."

Michael Higdon gave McCall's men the lead against the Buddies but St Mirren battled back to lead 2-1 going into the closing stages.

With Celtic beating Hibernian 3-0, a Motherwell defeat would have secured the league championship for Neil Lennon's side.

"We knew at the beginning of the season that Celtic would be having a title party at some stage but at what stage you never knew," said McCall.

"I thought it was an outstanding game. Even if we had lost the game 2-1, the players couldn't have given any more.

"The play, the entertainment was first class. I'm absolutely delighted, not with the point so much, but with the way we played and the way we entertained.

"If supporters have been today and not enjoyed that, then they're not supporters."

Finishing second or third will secure a European place and McCall added: "All our thoughts are on trying to get as many points as we can to finish in the European spots."