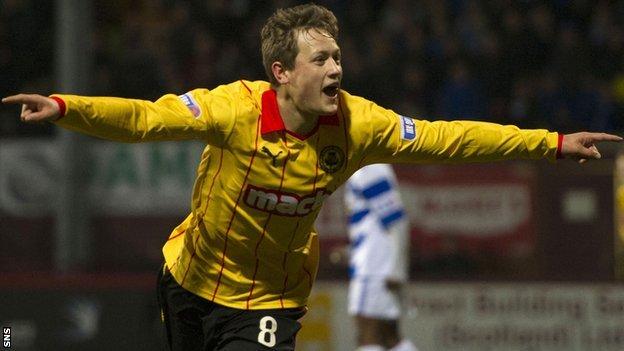 James Craigen's strike gave the hosts the lead four minutes before the interval.

Martin Hardie and Craig Reid threatened for the visitors in the second half.

But Thistle, who still have a game in hand, saw out the win to move five points clear at the top of the division.

Kick-off was delayed to allow more time for the near-9,000 crowd to make their way into Firhill.

Kris Doolan's flashing header went straight into the arms of Morton goalkeeper Derek Gaston shortly before Thistle made the breakthrough.

Chris Erskine's driven cross was missed by Doolan and Morton defender Thomas O'Ware but Craigen swept home at the back post.

A header by Kevin Rutkiewicz did not have the beating of Scott Fox as the visitors tried to respond before the turnaround.

Doolan set up Sean Welsh for a shot that travelled out at the start of the second half.

Morton duo Hardie and Reid were also off target and the Greenock side sent on striker Archie Campbell in place of Colin McMenamin.

The Jags remained resolute in defence and the home fans were soon celebrating what could prove to be a decisive win.