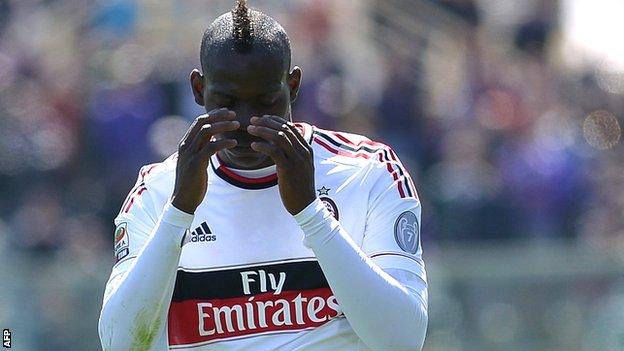 AC Milan striker Mario Balotelli has been caught smoking in a train toilet during the team's trip to Florence.

The latest in a catalogue of incidents involving Balotelli saw the 22-year-old Italian reprimanded by a train guard.

Smoking is banned on Italian trains and Milan chief executive Adriano Galliani told Gazzetta dello Sport: "I want to say that we're going to fine him."

Balotelli played the full 90 minutes in his side's 2-2 draw with Fiorentina, which keeps them third in Serie A.

He from Manchester City on 31 January and has scored seven goals in eight appearances.

While his two-and-a-half years at City were overshadowed by a he has stayed out of trouble since returning to Italy.

But he is likely to make headlines again following this indiscretion.

"You have to twist Balotelli's ear, he was smoking in the toilets," the train controller told Galliani, according to Gazzetta dello Sport.

His spell in England ended with four red cards to his name, while he was also involved in a training ground bust-up with Micah Richards.

Balotelli , and threw a dart at a City youth team player.

The former Inter Milan forward's most high-profile incident arguably came in October 2011, when in the bathroom of his home, causing a fire.