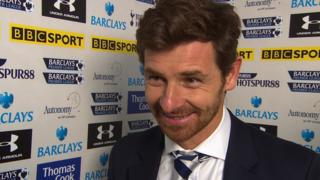 Tottenham manager Andre Villas-Boas says the race for Champions League qualification will go down to the last day of the season following their 2-2 draw with Everton at White Hart Lane.

Spurs took the lead through Emmanuel Adebayor after just 33 seconds, but Phil Jagielka levelled for Everton and took the lead with a fine solo goal by Kevin Mirallas. Gylfi Sigurdsson scored a late equaliser to secure a vital point for the home side.