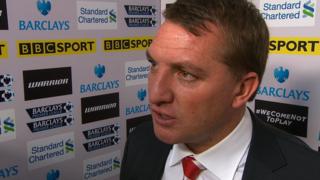 Liverpool manager Brendan Rodgers says his players were outstanding, but just lacked a bit of good fortune, during their a 0-0 draw with West Ham at Anfield.

Rodgers insisted "only one side tried to win" a game in which Liverpool had a Steven Gerrard penalty claim turned down and a Daniel Sturridge goal ruled out for offside.