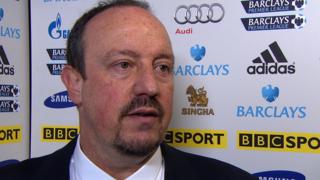 Interim manager Rafael Benitez praises the "reaction" of his Chelsea side in turning a 1-0 half-time deficit into a 2-1 Premier League win over Sunderland.

The Spaniard complains that his side are playing "too many" games and the Blues trailed at half-time following Cesar Azpilicueta's own goal.

Sunderland's Matt Kilgallon deflected in a shot for another own goal before Serbian defender Branislav Ivanovic scored the winner by turning in David Luiz's effort.

The win sees Chelsea move back into third place in the Premier League, level on points with Tottenham and two clear of fifth-placed Arsenal.