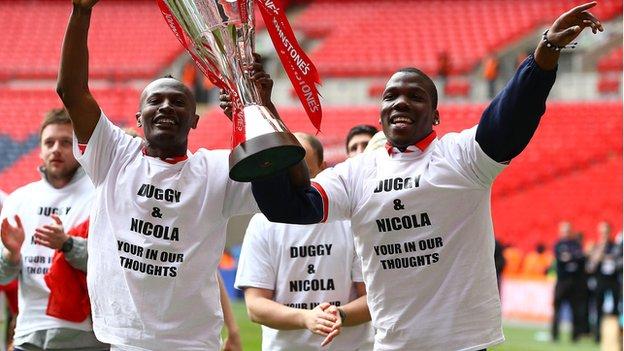 The 25-year-old defender's baby son died earlier this week, only a few days after his birth.

The Alex players wore T-shirts at Wembley to show their thoughts were with Dugdale and his partner Nicola before going on to beat Southend 2-0.

"I'm sure the players put that little bit extra in for him," said Davis.

"We're a family. We're that sort of club. We rally and get behind people.

"Adam has not been into the club for a couple of weeks now.

"I phoned him on Saturday morning and he and Nicola were holding up as best as they could. I told him the players were behind him and they would try to do something for them."

Luke Murphy and Max Clayton scored the goals that secured a first-ever Football League Trophy success for the Alex.

The young pair are products of Crewe's renowned youth academy and, like Ashley Westwood and Nick Powell who left for Aston Villa and Manchester United respectively last summer, Murphy in particular is attracting interest from bigger clubs.

Villa boss Paul Lambert was at Wembley to watch the 23-year-old midfielder stroke in Crewe's opener on six minutes.

"We haven't had any enquiries for Luke," said Davis, who led Crewe to victory at Wembley in last season's League Two play-off final.

"But we've had a lot of people watching. Maybe in the summer something might happen, I don't know.

"He's a very talented lad. We feel he is better than Ashley Westwood because he is a goalscoring midfielder.

"Paul Lambert was watching him and he will probably have asked Ashley about him.

"Everyone talks about the academy but nobody gets to see what we produce until they get sold on.

"We've got some good players at this level who probably will play higher and they put in a good performance."

Southend headed back to Essex having still never won this competition, despite reaching three finals.

The game was only boss Phil Brown's third in charge since he took over from Paul Sturrock, who had initially been told he could return to lead out the side at Wembley before declining the offer.

But Brown is now focused on making up the six-point gap his side need to overcome to get into the League Two play-offs.

"I don't think it was the preparation that cost us," said Brown. "I've said to the players afterwards that we've got five massive league games.

"Results at the weekend went for us and that's the talk among the players. They now have two eyes on promotion.

"The glamour of the Wembley cup final has gone now and now we have to focus on Rochdale at Spotland on Wednesday night."