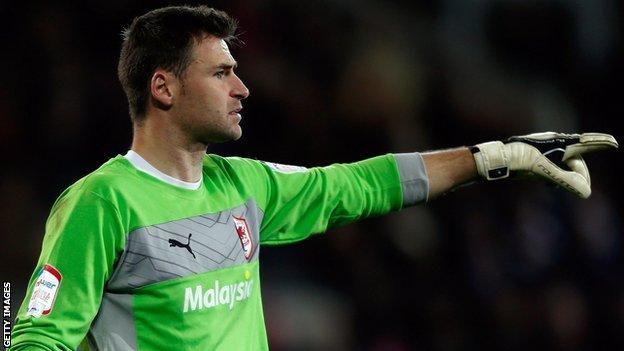 The Bluebirds' bids for promotion from the Championship fell short every season since Marshall's 2009 arrival.

"Since I've been at the club we've never had [such] a prolonged run at the top," said Marshall.

"So it's completely different and there's a lot of new boys as well so it's a totally different experience."

Under manager Malky Mackay's predecessor Dave Jones, Cardiff missed out on the play-offs at the end of the 2008-09 season.

In the two subsequent seasons, Cardiff suffered play-off disappointments against Blackpool and leading to Jones' 2011 departure.

Mackay's reign began in 2011-12 by again making, but not progressing from the play-offs.

But this season, Mackay has kept his side at the top of the table since November.

Marshall says Cardiff are "desperate to get over the line" and can go a step closer to achieving that aim when Barnsley visit Cardiff City Stadium on Tuesday, 9 April.

That clash is Cardiff's game in hand over promotion rivals Watford, where on Saturday, and Hull.

Marshall will be relieved when the fixtures-played issue is out of the way.

"It's been a bit annoying with a game in hand," said Marshall.

"We've always been a game behind everybody else so come the end of the game Tuesday night, we'll be hoping it's another three points and we'll know exactly what we need in the last five games.

"So it's a massive game Tuesday."

If they beat the Tykes, Cardiff can secure promotion if they beat Nottingham Forest in Cardiff on Saturday, 13 April and Watford fail to win at Peterborough.

Cardiff City are likely to be without striker Fraizer Campbell against Barnsley. The striker missed the draw at Watford with an ankle problem, and defender Matt Connolly is doubtful with a groin strain.