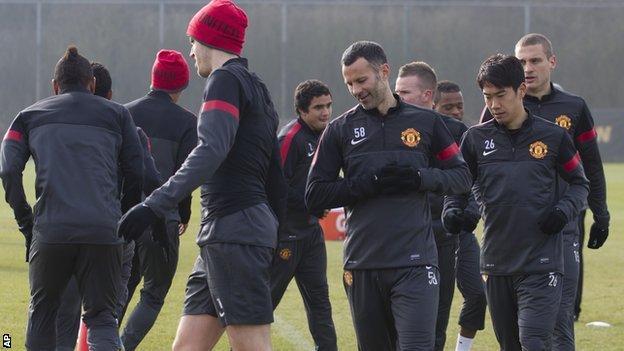 Manchester United's Carrington training ground is to be renamed the Aon training complex as part of a ground-breaking naming rights agreement worth around £15m a season.

The eight-year deal, which starts in July, gives the American insurance giant the right to display its logo on training kit for friendly and competitive domestic fixtures.

Aon will also become United's "presenting" partners for overseas tours starting with this summer's trip to the Far East.

The move will inevitably lead to concerns from some United supporters that the club's American owners, the Glazer Family, will now seek to cash in again by selling the lucrative naming rights for Old Trafford.

But the club's executive vice-chairman Ed Woodward insisted that "Old Trafford will not be sold".

United sources added that the Glazers see Old Trafford as the "heart and soul" of the club and do not want to do anything that might jeopardise that.

Aon are currently the club's main kit sponsor but are to be replaced by Chevrolet from the start of the 2014-15 season. The new training ground and kit deal extends Aon's relationship to 2021 and will be worth around £120m over the life of the contract.

Since buying Manchester United in 2005, the Glazers have introduced a new global sponsorship strategy designed to cash in on the club's huge global appeal.

Last year, revenue from sponsorship and merchandising rose by 13.7% to a record £117.6m. According to the club, the rate of growth is set to increase in 2013. For the first six months of this year, commercial revenue is up 26.4% on the same period last year and the club have already signed 17 new deals.

Much of the growth can be explained by United's policy of splitting up their sponsorship rights on a territory-by-territory basis around the world in order to maximise income.

At the same time, the Glazers have opened offices in London and Hong Kong and plan to open one in the United States, to help the club increase their global marketing and sponsorship operation.

As part of the new deal with Aon, the company will advise United on its plans for global expansion but will also offer value-in-kind services such as player and staff insurance, data analysis and research.

United broke new ground two years ago by becoming the first club to sell sponsorship rights to its training kit to DHL.

Last October they bought the courier and logistics company out of its £40m, four-year deal, anticipating it could make more money from another partner.

Phil Clement, the global chief marketing officer for Aon, told the BBC its existing kit sponsorship deal with United had led to an "explosion of brand awareness" for the company but that its objectives had now changed.

"When we started the first partnership people didn't recognise our name," he said. "But by 2010 half the decision makers of major companies said they recognised our logo.

"We still want to drive our brand but we've hit the awareness goal. Now we want to use the relationship with Manchester United to better engage with our clients."

In practical terms that means Aon will be given special access to the 108-acre complex, which has become synonymous with United's development of young talent. It comprises 14 pitches as well as state-of-the-art medical and conferencing facilities.

In return for making their research teams available to Sir Alex Ferguson and his back room staff, Aon will be able to use the training ground to host conferences and seminars and entertain clients from around the world.

Clement insisted that aspect of the deal would not be a distraction for Ferguson and his players.

He said: "Obviously Sir Alex is very competitive and he will not allow any distractions and will make sure that nothing precious falls into the public domain. He has always been very supportive of us and fantastic to work with."