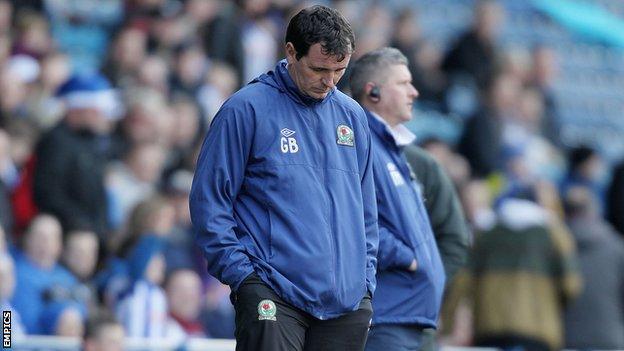 Ex-Blackburn striker Kevin Gallacher believes home games against Derby and Huddersfield will be season-defining matches for Gary Bowyer's side.

They are a point from safety with six Championship fixtures remaining.

"Blackburn have struggled at home this season, but they are two games that I would expect them to take six points," Gallacher told BBC Radio Lancashire.

"I said before the Sheffield Wednesday game that they really need a minimum of seven points from those three games.

"They've not got anything from the first one, so it's a definite six points [needed] from two massive relegation battles for Blackburn."

Rovers have not won in the league since 9 February and in any competition since defeating Arsenal in the fifth round of the FA Cup seven days later.

Caretaker manager Bowyer, who has since taking temporary charge for the second time this season, has a different view to Gallacher.

Speaking after Saturday's loss at Hillsborough, he said: "The next six games will [determine if Blackburn will survive]. If we win the next two games, nothing's guaranteed from that. The next six games are going to decide our fate.

"Not to come away with anything [at Sheffield Wednesday] is a blow but I think we can take a lot of positives. At 2-2, I thought there were only one team that was going to win it and that was us.

Blackburn have the best home record of any team currently in the bottom eight of the Championship, having taken 29 points from their 20 matches at Ewood Park.