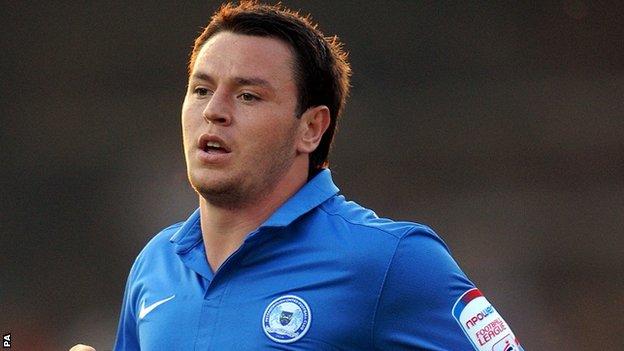 Goal-scoring midfielder Lee Tomlin believes Peterborough are capable of extending their eight-game unbeaten run until the end of the season.

Despite their success Posh are still in the Championship relegation zone, but Tomlin is confident they can escape.

"We have five games left and if we remain unbeaten it will keep us up," he told BBC Radio Cambridgeshire.

"If we stay in the Championship, it would probably the best thing that will have ever happened at the club."

Peterborough lost their first seven league games of the season, but have since produced some remarkable results, including beating champions-elect Cardiff City home and away.

They picked up a valuable point at Huddersfield on Saturday, when Tomlin and Dwight Gayle scored in a 2-2 draw.

Gayle, who was signed from Dagenham and Redbridge on a four year deal in December after scoring five goals in six appearances on loan, has now scored 12 goals for Posh this season, while 24-year-old Tomlin has 11 goals to his name.

However, he was less than impressed by the state of Huddersfield's pitch.

"I actually thought the ball was going to bobble up when I got my chance, but it didn't and thankfully I slotted it away."

Posh next face home games against Watford and then Brighton, both teams in the promotion and play-offs picture, and Tomlin believes it is vital for Posh to pick up at least one win.

"They're two very hard teams, both chasing promotion, but we have shown we can beat anyone when we want to," he added.