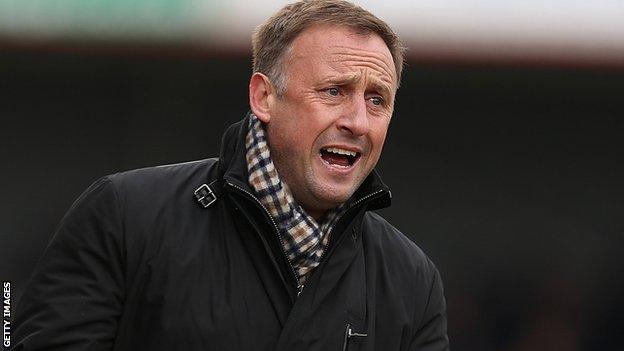 Cheltenham manager Mark Yates has apologised for confronting a disgruntled fan after his side's 2-0 defeat by Plymouth on Saturday.

Yates was involved in a verbal exchange with a supporter as he and his players went to applaud the travelling fans after the final whistle.

"I want to apologise for the use of bad language aimed at a supporter.

"It was unacceptable and for anyone that I have offended, I'm sorry," 43-year-old Yates said in a statement.

"I took my players over to our fans at the end of the game to thank them for travelling so far and supporting us, as I do every away game.

"I saw one supporter approach one of my players and swear and shout at him in a very aggressive manner. The player in question had only come on as a sub with the score already at 2-0 and I am sorry to say I reacted to this supporter."

He added: "We are a close-knit team and I always back my players, but I certainly regret what I did and apologise for any offence caused by my language.

"It was a frustrating day for myself, the players and of course the supporters. It is now important to put this behind us with three big games approaching, starting with Gillingham next weekend."

Saturday's result meant Cheltenham missed out on regaining their place in the automatic promotion places in League Two.

Last year's beaten play-off finalists are fourth in the table with three games left to play.