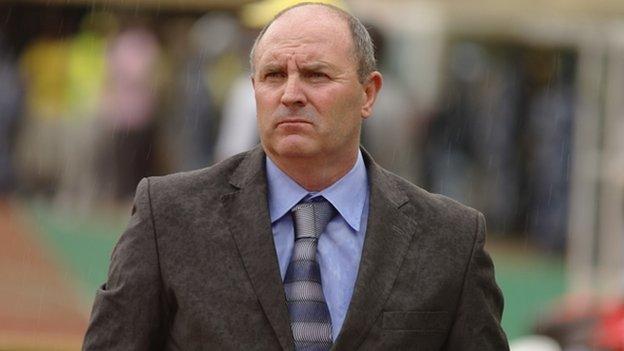 Bobby Williamson has been sacked as the coach of Uganda after last month's defeat in Liberia left the Cranes bottom of their 2014 World Cup qualifying group.

The Scottish coach took over Uganda in August 2008 and despite winning the regional Cecafa Senior Challenge four times he failed to lead the Cranes to the Africa Cup of Nations finals.

The Federation of Uganda Football Associations says he has lost his job in order to make 'technical changes.'

Uganda's 2-0 loss to Liberia on 24 March in a World Cup qualifier leaves the Cranes at the bottom of Group J.

They have two points from their three games so far and are three behind leaders Senegal, with only the group winners advancing to the final knockout stage.

"All I can say is that Bobby played his part and tried all he could - whatever the situation," he told BBC Sport.

"But it was not our time yet, so let's see what the next step is for us.

"I wish him the best Luck."

The Cranes next two qualifiers are in June at home to Liberia and Angola.

Uganda lost a penalty shoot-out to 2012 African champions Zambia last October to narrowly miss out on this year's Nations Cup.

A year earlier they were held to a goalless draw by neighbours Kenya when a win would have seen them reach the 2012 edition in Equatorial Guinea and Gabon.