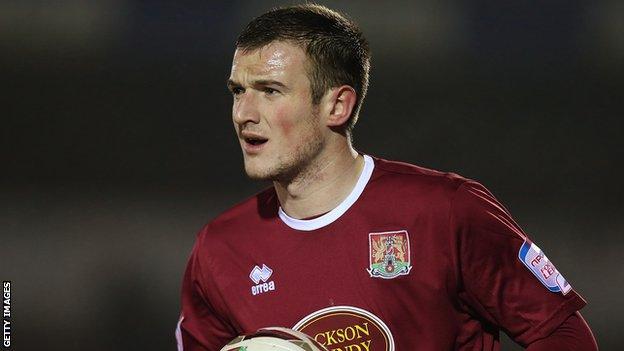 Northampton Town's Lee Collins says that results in League Two show that pressure may be affecting some teams.

Cobblers lost at Cheltenham and Bradford but none of their rivals for promotion could take advantage.

Northampton, Cheltenham, Exeter and Rotherham all lost, while Burton went down 7-1 to Port Vale.

Collins told BBC Radio Northampton: "I think it could come down to bottle in the end. Some people might not have that bit of courage to see it through."

He added: "I know our two results haven't been good and people could say we've lost our bottle, but we haven't."

"We know we've lost out on six points. But we could've got six points and everyone else would have got theirs. We're still there and we've got a strong enough team to get automatic promotion.

"We've put in two really good performances and we haven't got our just rewards."

Northampton play away to Wycombe and Port Vale and host York and Barnet in their remaining matches.

And Collins, who joined the club in February, says he is determined to help the club get into League One.

"I'm really enjoying my football again," said the 24-year-old. "I've got that passion and desire to win and it's really burning inside me to get this promotion.

"I want it and all the lads want it. We're just not getting the results.

"We've got that unbelievable home record [of ten straight wins] but we won't take that for granted. York are fighting for survival so they'll be up for a scrap."